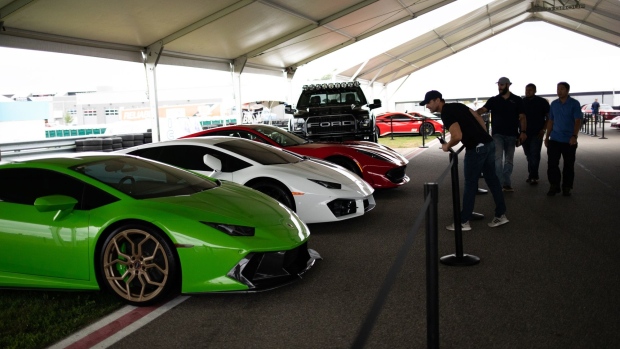 Employees arrive at the Ferrari SpA headquarters and automobile plant in Maranello, Italy, on Tuesday, Oct. 4, 2016. After Britain's stunning decision to withdraw from the European Union, now comes another ballot that could topple a leader should Italy defy Prime Minister Matteo Renzi over what, on paper at least, is the constitutional issue of reducing the size and powers of the Senate. Photographer: Alessia Pierdomenico/Bloomberg , Bloomberg

The one-megawatt installation will provide about 5% of the energy needed at Ferrari’s Maranello operations and marks San Jose, California-based Bloom’s entry in the European market. Ferrari announced plans last week to turn its factory into a hub for battery-powered car production, confirming an earlier Bloomberg News report.

Fuel cells use an electrochemical reaction rather than combustion to generate electricity and are more efficient than gas-burning turbines. That will help Ferrari deal with natural gas costs that have soared following Russia’s invasion of Ukraine, while trimming the company’s emissions of carbon dioxide. Financial details of the deal weren’t disclosed.

Ferrari has set a goal of achieving carbon neutrality in manufacturing by 2030.

Although the Bloom fuel cells will initially run on natural gas, they can be configured to use hydrogen instead, with water vapor as their only emissions. Italy has set a target of relying on hydrogen for 20% of its energy use by 2050 as it moves away from fossil fuels.