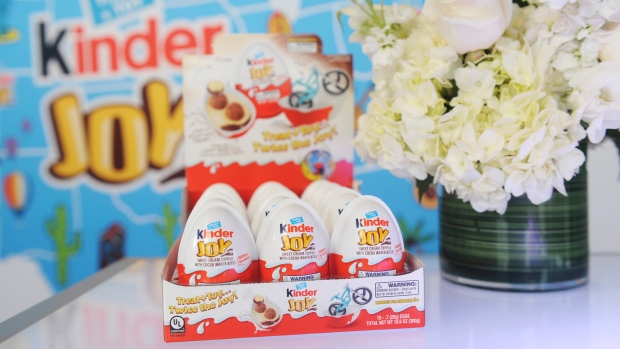 A view of the new Kinder Joy eggs at Kinder Joy Launch Event with Malin Akerman at Current at Pier 59 on Monday, Nov. 13, 2017 in New York. , The Canadian Press

Ferrero SpA sells nearly 3.5 billion Kinder Surprise eggs around the globe – but hasn’t been able to crack the U.S. market – until now.

Long available in nearly 170 markets, the Italian chocolate giant is finally bringing Kinder eggs to the U.S. market. However, instead of the familiar Kinder Surprise, Americans will be getting the Kinder Joy variation. Kinder Joy has been available in Italy since 2001 and select global markets including Spain, China and the United Kingdom in subsequent years.

Ferrero announced in May that the eggs would be available in stores at the beginning of 2018, but the company has since decided to rush the candy out two months early to cash in on the holiday shopping season.

The U.S. Food and Drug Administration bans candy products that contain toys or objects.  The Kinder Joy gets past that law by splitting the egg into two distinct, separated parts.  One part contains a candy-like cream with chocolate and milk flavours, while the other contains the types of small, assembly-required toys usually found inside Kinder eggs worldwide.

U.S. Customs and Border Protection data from 2011 suggested that nearly 60,000 Kinder Surprise eggs were seized at U.S. customs checkpoints and unknowing importers were threatened with fines ranging from US$350 to US$2,500 for attempting to bring them into the United States.

Ferrero - the maker of Tic Tacs, Kinder and the signature Ferrero Rocher chocolates - has long been second to Mondelez in terms of European chocolate market share, even holding a 9.5 per cent share of the global chocolate market according to Euromonitor International.

However, it’s been an uphill battle for Ferrero as it attempts to tap into America’s nearly US$18.5 billion chocolate market. Market-leader Hershey still holds a nearly 31 per cent market share, with Ferrero ranked sixth.

The Kinder Joy is not Ferrero’s only weapon as to looks to gain market share in the U.S.  It scooped up Chicago chocolate institution Fannie May for US$115 million in May, 2017 and just last month forked out US$1.3 billion for Ferrara Pan – the maker of Lemonheads, Trolli, Brach’s and Fruit Stripe gum.