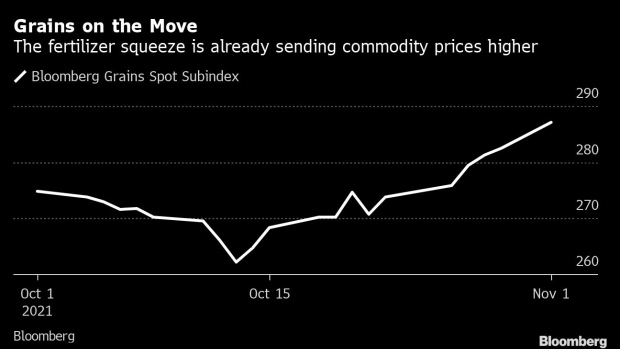 Workers harvest coffee on a farm in Guaxupe, Minas Gerais state, Brazil, on Wednesday, June 2, 2021. The severe drought in agricultural powerhouse Brazil is shaking up the world's crop markets again, this time because farmers in the top exporting country are finding they can't meet sales agreements made months ago. Photographer: Patricia Monteiro/Bloomberg , Bloomberg

(Bloomberg) -- Fertilizer is so vital to Walter do Carmo Padua Jr.’s coffee trees that he can’t imagine producing any beans without it. That’s a problem because getting his hands on the stuff is now harder than any time in his 20 years of farming as the world faces record fertilizer prices in the latest threat to food security.

In Brazil’s Minas Gerais state, the coffee heart of the world’s biggest exporter, Padua is still waiting for deliveries on about half the fertilizer he paid for five months ago. After losing about 40% of his crop last year to drought, his farm was then hit by frost. Plants are extremely stressed, and he’s worried production this upcoming season will be even worse than the last if he doesn’t get the fertilizers he needs.

“That’s food for coffee,” Padua said. “Everything goes wrong even when applying fertilizers. Can you imagine if I don’t?”

The problems couldn’t have come at a worse time for agricultural supply chains. Global food prices have surged more than 30% in the past 12 months to reach a decade high as climate change ravages crops and the pandemic’s blow snarls  production. Meanwhile, about a 10th of the world already doesn’t have enough to eat. The fertilizer crisis means major staple crops -- corn, rice and wheat -- are in further jeopardy, sending the Bloomberg Grains Spot Subindex up about 4% in the past month.

Nitrogen-based fertilizers, the most important crop nutrients, are made through a process dependent on natural gas or coal. Those fuels are in extremely tight supply, forcing fertilizer plants in Europe to cut back on production or even, in some cases, close. Meanwhile, China has curbed exports to ensure enough domestic supply. That’s on top of elevated freight rates, increased tariffs and extreme weather, all of which have disrupted global shipments.

Food Prices Poised to Surge With Fertilizer at Highest in Years

It's hard to overstate the importance of fertilizer to the food supply. Nearly every plate of food you touch has gotten there with the help of fertilizers. Even organic foods use animal manure and other nutrients. But it’s synthetic fertilizers that are widely credited for how the world gets fed.

Since we first started making synthetic fertilizers a little more than a century ago, the planet has gone from roughly 1.7 billion people to about 7.7 billion, largely thanks to enormous growth in crop yields. Some experts have even estimated the global population might be half of what it is today without nitrogen fertilizer.

With fertilizer markets now seeing unprecedented supply shocks and record prices, it means even more food inflation across the world.

Global commodity futures are already convulsing. Benchmark wheat prices have shot up to the highest since 2012, coffee is near multi-year highs and corn has also jumped.

Across Brazil, about a third of the nation’s coffee farmers don’t have enough fertilizer. In the U.S., some corn growers are seeing prices that are more than double what they paid last year. In Thailand, some rice farmers are calling on the government to intervene in the spiraling market.

And two of the world’s top fertilizer producers,  Nutrien Ltd. and Mosaic Co., have said they expect the price surge will continue.

“Farmers could pass the higher cost of fertilizers on to consumers in the form of lower crop production and the subsequent higher food prices,” said Alexis Maxwell, an analyst at Green Markets, a business owned by Bloomberg.

A benchmark North American fertilizer price index rose 0.4% to $1,017.87 per short ton Friday, still teetering close to a record reached in October, according to Bloomberg's Green Markets. A gauge of western European prices for ammonia, used to make nitrogen fertilizer, surged 12% last week to a 13-year high of $910 a metric ton. Other price measures have also soared.

About 30% of Brazil’s coffee farmers haven’t received the fertilizers they’ve ordered, or worse, can’t find any to buy, according to Regis Ricco, a director at Minas Gerais-based RR Consultoria Rural. This could result in losses for the next two years since the soil may not get enough nutrients to support the development of plants that will produce beans in 2023’s crop, he said.

Meanwhile in Peru, shipments of urea are delayed by as much as three months, and its price has tripled from $20 per 50-kilogram bag to $60, said Lorenzo Castillo, general manager of the nation’s National Coffee Board. That will absolutely hurt yields next year because growers won’t be able to afford as much as they’d typically use, he said.

In the U.S., high fertilizer prices could mean a smaller corn crop. The yellow grain uses more nitrogen fertilizers, so some farmers could look to cut costs by switching to soybeans, said Maxwell of Green Markets. Corn futures in Chicago have jumped more than 10% since mid-October, driven by concerns over shrinking plantings.

Fertilizer Prices Could Drive Cost of Corn Production Up 16%

Dan Cekander, a fourth-generation soybean and corn farmer in central Illinois, has been farming since 1987 and said he’s never seen fertilizer prices this high.

In mid-October, Cekander started making inquiries into ammonia. The quote, at $880 a ton, was 75% higher than the $504 a ton he paid last year. But he usually applies fertilizer in the spring, so he decided to hold off on buying.

“The cheaper stuff is gone,” said Cekander, who may end up changing his usually planting plans of splitting his acreage 50-50 between corn and soybeans.

“I’ll have to see what the price is,” he said. “If it’s just ridiculous, we may have to do something different -- either use less or switch to beans.”

Europe has been among the regions worst hit by the energy crisis, and that’s bleeding over into fertilizers.

Surging natural gas prices forced a number of nitrogen-fertilizer plants to halt or curtail production, including Norway’s Yara International ASA and top European chemicals company BASF SE. The gas makes up about 80% of the cost to produce the nutrients and prices are four to five times higher than normal, according to industry group Fertilizers Europe.

Fertilizer scarcity could curb grain yields and quality in the European Union, the world’s biggest wheat exporter and a major barley supplier.

“Day by day, the risks of shortages in France are becoming clearer,” local farming groups said in a joint statement, which estimated rising fertilizer expenses could add 4 billion euros ($4.6 billion) to costs for the agriculture sector.

Surging fertilizer prices will raise costs for many rice farmers in Asia and risks pushing up prices in a region where the vast majority of the world’s supply is produced and consumed.

Pramote Charoensilp, president of the Thai Agriculturist Association and a rice farmer, said that fertilizer prices for supplies sold in Thailand are on their way to doubling.

“A ton of fertilizer is now more expensive than a ton of rice,” he said. “The government should step in to intervene.”

In the region, fertilizer prices are very tied to exports from China. The country is a key supplier of urea, sulphate and phosphate, accounting for about 30% of global trade. The market has been tight since the nation imposed new hurdles for exporters in a bid to protect domestic supplies.

The Massive Fertilizer Rally Is Coming for Rice: Supply Lines

The timing of the fertilizer rally “could not be any worse” for Canada’s farmers, many of whom saw their profits tumble this past growing season after severe drought shriveled crops, said Todd Lewis, president of the Agricultural Producers Association of Saskatchewan. Some may opt to plant crops that require less fertilizer, like lentils, or borrow against their farmland to cover their expenses in 2022, he said.

Rising fertilizer prices are adding an extra C$50 ($40) per acre in costs for farmers like Norm Hall, who saw the harvest of canola, wheat, peas and flax drop by nearly half on his Wynyard, Saskatchewan farm this year. While he’s testing his soil to see if he can apply less fertilizer in some fields, some farmers are taking an even more risky approach, he said.

“There’s guys that aren’t even doing that, they’re just saying ‘I’ll put on half the fertilizer,’” Hall said. “That’s like jumping in your truck to go to the city without looking at the fuel gauge and crossing your fingers that you make it.”