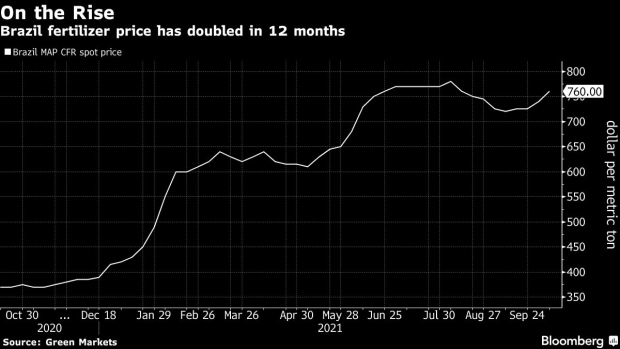 Corn is loaded into a grain storage bag during a harvest at a farm in Correntina, Bahia state, Brazil, on Monday, Sept. 20, 2021. Brazil’s corn and soybean crops for the new season are in the ground, and both the Brazilian government and the USDA are projecting production records, although ongoing drought may hamper yields. , Bloomberg

(Bloomberg) -- Brazilian farmer Antonio Carlos Jacobsen usually buys fertilizer a few weeks before planting his corn fields. Soaring fertilizer prices are pushing him to move up purchases for the March seeding -- although it may already be too late.

“We were caught by surprise with these skyrocketing prices,” said the 64-year-old grower who planned to seed 1.2 million hectares on his farmland in the northeastern state of Bahia. “Even worse, there is uncertainty whether this fertilizer will be delivered on time,” he said in an interview.

Jacobsen’s predicament isn’t unique among grain growers in this South American nation, and the impacts may reverberate beyond Brazil’s borders. The agricultural superpower is the world’s top exporter of soybeans, sugar and coffee and No. 2 supplier of corn, and it needs to buy around 80% of its fertilizer requirements. Soaring fertilizer prices and tight supplies may end up limiting Brazil’s corn yields in the coming year.

Brazilian farmers plant their biggest corn crop -- known as “safrinha” -- in the first quarter, just after the soybean harvest. That second corn crop could help ease inflationary pressures in the country, where consumer prices are rising at the fastest pace in more than five years. It could also bolster global supplies, with Brazilian exports providing relief to higher corn prices. Used as feed, costly corn drives up meat prices worldwide.

The problem is most Brazilian growers haven’t guaranteed their fertilizer needs or locked in prices yet, according to data from financial firm StoneX Group Inc.

About 39% of farmers’ fertilizer needs for the first half of next year had already been negotiated as of the end of August, according to StoneX analyst Luigi Bezzon. While that’s in line with the historical average, this time it may have undesired consequences: most growers need to buy fertilizers as costs are soaring and worries of non-delivery are increasing.

Such delivery fears are reasonable given that some of the fertilizer bought in advance hasn’t been produced, according to Bezzon.

“There’s a concern on corn yield potential,” said Guilherme Bellotti, an analyst at Itau BBA. “Expensive fertilizer may limit use. If we also had weather issues, we may see an impact on production.”

Brazil spot prices for phosphate fertilizer more than doubled during the past year, while potash and urea tripled in the same period. Global crop nutrients prices have been increasing amid high energy costs, plants shutdowns and government sanctions, fueling expectations of supply shortfalls.

The Brazilian farmers may opt to just forgo fertilizer. Jacobsen said that if he can’t get the crop nutrients in time, he’ll just go ahead and plant corn without it -- even though he’d expect a 30% drop in yield.

“Maybe lower yields will be offset by lower costs, meaning the same margins or even higher,” he said.