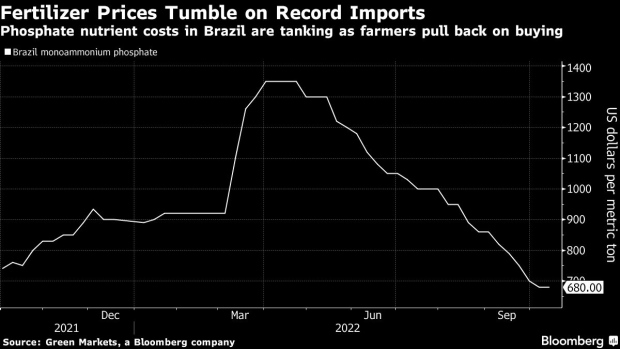 Fertilizer stored in a warehouse at a farm near Brasilia, Brazil. , Bloomberg

(Bloomberg) -- Fertilizer prices are falling as farmers balking at the high costs of nutrients hold off on purchases, driving down demand and causing gluts that are upending the market for crop inputs.

Fertilizer prices soared to record highs earlier in the year after sanctions against Belarus, a major producer, and Russia’s war in Ukraine fueled soaring prices for crop nutrients. That prompted global fertilizer firms to boost purchases and transport massive amounts of product to avoid supply chain issues and trade restrictions in export markets such as Russia.

Such moves have led to bloating fertilizer inventories in some key regions and farmers just aren’t buying -- a situation that’s now weighing on the market. The turnabout is playing out in both the US, a major fertilizer-buying nation and the world’s top corn exporter, as well as agricultural powerhouse Brazil, the No. 1 soybean supplier.

“Farmers are pulling back on the pricey input,” Bloomberg Intelligence analyst Alexis Maxwell said. “Global ammonia, phosphate and potash demand are all down year to date.”

A weekly index for the common nitrogen fertilizer urea in New Orleans fell 3.2% Friday, extending a monthlong downward trend as US farmers wait to see how low prices might go. Brazilian farmers are also halting purchases, driving prices down as fertilizer piles up.

Those in the fertilizer industry were betting farmers would buy the crop inputs given how high grains prices have been in a world facing shortfalls. But as farmers saw crop prices retreat from highs they moved to curb expenses, revisiting decisions around fertilizer applications, deliveries and the impacts on yields for future harvests. For example, while corn farmers must apply nitrogen every year, those in the US don’t often need to do it in autumn.

The start of the fall fertilizer application season in the US hasn’t been that great, said Josh Linville, director of fertilizer at StoneX. The market could see a lot of growers looking to buy nitrogen in the spring and the market could struggle to meet that demand, he said.

Brazil, the world’s largest importer of fertilizers, is facing similar circumstances. The country imported a record amount of fertilizer this year to ensure farmers would have enough inputs to expand their planted areas.

Fertilizer deliveries in Brazil between January and July fell 8.7% from the same period a year ago, according to the Brazilian National Fertilizer Association. The industry group sees deliveries falling between 5% and 7% for the full year.

Meanwhile, Brazil fertilizer prices have plunged by almost half from April’s highs, which is leaving some to wonder how low they can go.

“Prices of some fertilizers are far above previous years,” said Jeferson Souza, fertilizer analyst for Agrinvest Commodities in Brazil. “Farmers see the price dropping and keep waiting to make purchases.”