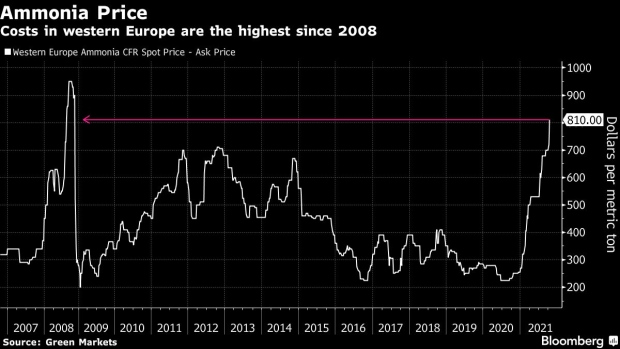 A farm worker harvests asparagus from a field at a farm near Sandwich, U.K, on Thursday, May 6, 2021. Migrant workers have left the U.K. in their tens of thousands, and new visa rules after Brexit will make it harder for many of them to return. Photographer: Chris Ratcliffe/Bloomberg , Bloomberg

Crops of winter wheat and barley are being sown just as numerous nitrogen fertilizer plants in Europe shut as prices jump for their key feedstock, natural gas. Those fields will require fertilizer when they thaw next year to boost yields and quality. Consequently, soaring nutrient prices risk curtailing output, highlighting how the spike in global energy costs is adding to food inflation.

“We have a lot of question marks about not only the price, but if there will be enough supply of nitrogen fertilizer for next spring,” said Philippe Heusele, general secretary of French wheat growers’ group AGPB. “The question is should we plant 100% of what was foreseen before the winter or not.”

The surge in local prices for ammonia -- the foundation of nitrogen fertilizers -- to a 13-year high is part of more widespread inflation across farm inputs, including fuel and machinery, according to Pekka Pesonen, secretary general at Brussels-based farm lobby Copa-Cogeca. In Russia, sugar-beet growers are also planning cutbacks due to rising production costs.

“We’d expect that farmers would most probably alter their cultivation and rotation plans to offset at least partly the higher prices of nitrogen fertilizer,” Pesonen said.

Still, nitrogen typically accounts for about a third of grain production costs and that could rise closer to 50% if current prices persist, Heusele said. APGB has called on the European Commission to end anti-dumping taxes on some fertilizer imports.

U.K. farmer Stephen Watkins, who grows vegetables, grain and potatoes, said he’ll likely shift some spring plantings toward peas and beans, which don’t require nitrogen fertilizer. More growers have been inquiring about such crops, bolstered by rising demand for meatless burgers, according to James Maguire of Pulses U.K.

Other growers said they have booked much of their fertilizer supply, but are weighing investing in technology to help them apply less or are considering sewage-based alternatives for part of their needs.

Most fertilizer isn’t applied until spring, giving markets time to turn lower and lessen the impact on food output. For now, Paris wheat futures are treading at an eight-year high amid shrinking global stockpiles. The “unprecedented” fertilizer situation is also supporting next season’s prices, consultant Agritel said in a note.

“A risk premium is already integrated,” the Paris-based adviser said.