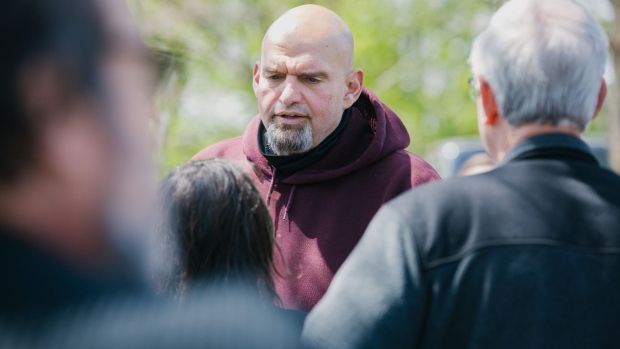 John Fetterman, lieutenant governor of Pennsylvania and Democratic senate candidate, speaks with attendees during a campaign event in Lebanon, Pennsylvania, U.S., on Saturday, April 30, 2022. Fetterman, the only candidate who has run statewide, leads the Democratic field with 33% in an Emerson College poll last month. , Bloomberg

(Bloomberg) -- Pennsylvania’s Lieutenant Governor John Fetterman easily won the Democratic primary for the US Senate on Tuesday from a hospital bed, as the Republican field remained unsettled in a tight three-way contest.

Fetterman defeated two other candidates with 56.2% of the vote, with a little more than a quarter of the precincts counted.

The 6-foot-8, gym-shorts wearing candidate was unable to attend his election night events as he recovers from a stroke he suffered last week. Earlier Tuesday, he said he received a pacemaker implant.

Fetterman had long been expected to win the race. But the Republican primary for the US Senate is less settled as it became a three-way heat between Mehmet Oz, a celebrity physician backed by former President Donald Trump, David McCormick a former Wall Street executive, and Kathy Barnette a conservative firebrand.

Oz and former Bridgewater Associates Chief Executive Officer McCormick, with their allies spent more than $54 million on ads -- a record for a Senate primary in the commonwealth. But Barnette upended the campaign with a late surge to make it a statistical tie in two polls released days before the primary.

There are also primaries Tuesday in North Carolina, Idaho, Kentucky and Oregon. The highest-profile of the races in those states is 26-year-old US Representative Madison Cawthorn’s bid for re-election in North Carolina. After a number of legal and political entanglements, the youngest member of Congress has lost the backing of the GOP in his state, but gained Trump’s in a multi-candidate primary. With most of the vote in, Cawthorn trailed State Senator Chuck Edwards.

On Tuesday afternoon, Fetterman’s campaign said that he was getting a pacemaker with a defibrillator implanted and later announced the procedure was successful. He said he cast his vote from Penn Medicine Lancaster General Hospital using an emergency absentee ballot.

In Pennsylvania’s governor’s race, Trump-endorsed state Senator Doug Mastriano, a staunch supporter of his false 2020 election claims, in a crowded Republican primary for the open seat. Mastriano was leading by a wide margin.

Meanwhile, several thousand mail-in ballots in Lancaster County, Pennsylvania, have to be manually marked and rescanned after a printing issue made them unreadable, extending the vote counting process, officials said Tuesday. Under state law, returned mail-in ballots cannot be opened and counted until 7 a.m. the day of the election.

The Republican Senate race is also another test of Trump’s grip on the GOP and whether his base voters follow his endorsements as he seeks to elect loyal candidates and teases another White House bid in 2024. Trump endorsed Oz in the primary.

Earlier this month, the former president scored a victory in neighboring Ohio when his endorsement helped  JD Vance come from behind to win the Republican primary for an open US Senate seat. But Trump’s imprimatur hasn’t given Oz the same boost, and he’s struggled to separate from McCormick and a rising Barnette.