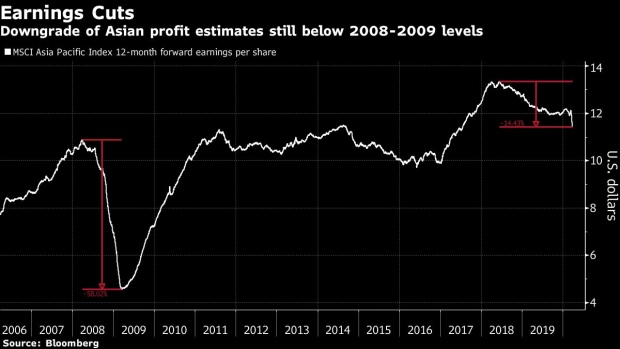 Even a nearly 11% rally in two days isn’t quite enough to convince investors that the Asian equity market is out of the woods.

Stocks rallied in nearly every country in the region Wednesday, pushing the MSCI Asia Pacific Index to its best two-day advance since October 2008. The benchmark has bounced 10.7% since a loss on Monday, led by gains in Japan, Korea and India. The U.S. White House and Senators striking a stimulus deal and a report of China’s central bank considering a deposit rate cut were the latest sentiment boosters.

The rebound has been much sought for amid concerns over the coronavirus, which wiped out about $7.6 trillion in Asian stock market value over the past two months. Still, few are ready to call the latest splash of green a turnaround.

“A rebound doesn’t mean a market will go up in a straight line,” said Michael Liang, chief investment officer at Foundation Asset Management HK Ltd. “We may have another round of sell-off in April when companies started to announce first-quarter earnings and second-quarter guidance. Do you believe the market has fully discounted the earnings impact? I don’t think so.”

Earnings estimates for members of MSCI’s Asia stock benchmark for the next year have fallen about 14% from their peak in January, compared with a 58% slump from a high during the global financial crisis.

Companies with weak balance sheets and at-risk business models may see their value “permanently impaired, and some might not survive at all,” said Eli Lee, head of investment strategy at Bank of Singapore Ltd. While unclear when things could start to improve, it’s important not to be lured in by short-term blips, Lee said.

“Market contour of the Global Covid-19 Crisis is more likely to be W- or U-shaped,” said Lee. “For those seeking opportunities after a 30% sell-off, it is time to be very careful of dangerous value traps.”

Historical data also provide a warning sign. The last time the Asian benchmark had such a strong two-day rebound -- during the 2008-2009 financial crisis -- it soon fell about 20% before bottoming.

“While the huge fiscal package agreed today is a welcome sign, the challenge ahead remains considerable,” said Tai Hui, chief Asia market strategist at JPMorgan Asset Management. The economic data in the U.S. and Europe have started to show the first round of economic impact from coronavirus outbreak, he said.

That said, “recent new lows in stocks have been accompanied by either sideways or even lower volatility, indicating markets are starting to become more comfortable with the potential range of outcomes we face,” said Kelvin Tay, Asia Pacific chief investment officer at UBS Group AG’s wealth-management unit.

“Gains could be consolidated if we see more good news that containment measures are starting to rein in the spread of the virus,” Tay said.

More countries have tightened restrictions on residents as global cases topped 420,000, with India imposing a three-week nationwide lockdown. Singapore plans to shut bars and theaters in its strictest measures yet. President Donald Trump said he’s hoping to have the U.S. economy reopened by Easter next month.

“Key to watch is, with more country and city lockdowns, whether the next few weeks will see a similar containment pattern to emerge as seen in Asia/China,” said Anthony Chan, chief investment strategist for Asia at Union Bancaire Privee.