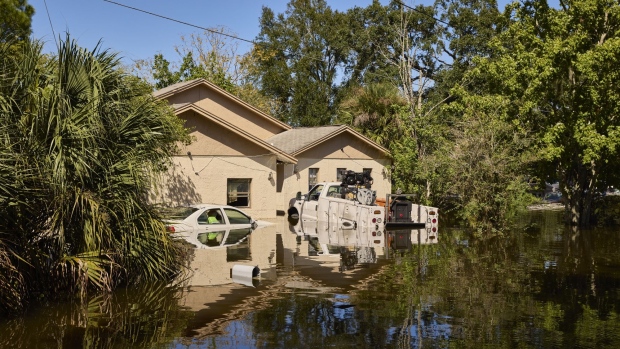 Vehicles and a home submerged in water in a flooded neighborhood following Hurricane Ian in Orlando, Florida, US, on Friday, Sept. 30, 2022. Two million electricity customers in Florida remained without power Friday morning, according to the tracking site poweroutage.us. Photographer: Brian Carlson/Bloomberg , Bloomberg

(Bloomberg) -- Deborah Palmer let the flood-insurance policy on her Florida preschool lapse when it was forced to close during the pandemic two years ago and never gave it a thought. Until Hurricane Ian.

As the monster storm bore down on Florida’s western coast this week, the 71-year-old fled her home in Venice to shelter in the former school, situated in a less vulnerable neighborhood. While winds howled and rain thundered down, “I thought, ‘Great move, genius, dropping flood insurance when the biggest storm in a century is coming through,’” she said. “I really gambled.”

A majority of Florida homeowners caught in the hurricane’s path now face rebuilding without the benefit of flood insurance -- and some might not even realize they’re uncovered.

Ian made landfall in Florida Wednesday with 150-mile (241 kilometers) per-hour winds and a swell of seawater that inundated Naples, Fort Myers and other cities. Damage estimates quickly began climbing, with at least one reaching $100 billion. The latest projection for insured losses from risk modeler Karen Clark & Co. is almost $63 billion.

Only 18% of all Florida homes -- of which there more than 10 million, per census data -- have flood insurance, according to the Insurance Information Institute. And some property owners harbor the misconception that policies protecting against damage from wind and rain will also apply to losses brought on by rising water.

“Many homeowners in hurricane-prone states assume they have flood coverage because they have hurricane coverage,” said Mark Friedlander, a spokesman for the institute.  “Many do not understand there’s a difference between windstorm coverage, which is in your homeowner’s policy, and flood coverage.”

The confusion arises in part from the way flood insurance is handled in the US.

Homes in high-risk flood plains with mortgages from federally backed sources are required to have flood insurance, which is most often delivered through the federally managed National Flood Insurance Program rather than via private policies. One unintended consequence of that mandate is that exempt homeowners might assume they have no flood risk, which isn’t the case, according to Nancy Watkins, a principal and consulting actuary with actuarial firm Milliman.

“The lack of availability of private flood –- and maybe a lack of understanding of flood risk -– made the rules for mortgages different for the flood peril than other perils like wind and fire,” Watkins said in a phone interview.

Areas considered low risk for flooding have been taking a beating as warming waters and rising sea levels exacerbate both the speed and intensity of storms. That and other changes in how the government pegs the cost of disasters are boosting what homeowners pay for flood coverage. In communities around the Gulf, the percentage of people who buy it is declining.

As flood-risk models are revised, “the amount that’s necessary to charge for flood insurance is just going up,” said Trevor Burgess, chief executive officer of Neptune Flood Insurance. So far, 20% of the claims Neptune has fielded from Ian have come from lesser-risk areas. Hurricane Harvey, which struck Texas and Louisiana in 2017, overwhelmingly devastated areas at lower risk for severe flooding.

In Florida’s hard-hit Charlotte County, the share of properties with coverage from the National Flood Insurance Program fell by about 5.5% by 2021 from 2017, according to figures provided by Neptune. For Lee County, home to Fort Myers, the decline was 10.6%.

Then, last October, the Federal Emergency Management Agency overhauled its system for assessing risk. That led to price hikes for millions of policies. Over the 12-month period before August, nearly 49,000 policyholders in Florida dropped their flood coverage, a decrease of 2.9%.

Rising insurance costs are particularly hard to bear in Florida. Many residents rely on fixed incomes, and their budgets have already been stretched thin by inflation and hikes in premiums for homeowners’ polices.

The national flood program, meanwhile, faces more than $20 billion in debt after disasters including Hurricane Katrina in 2005, Sandy in 2012 and Harvey. Inflation threatens to leave the program with fewer resources to educate consumers or reduce risk.

Palmer, for her part, said her school building and house endured Ian, except for an enormous rubber tree that collapsed on her garage.

Eleanor Perfetto, another Venice resident, said she is paying between $800 and $900 a year for a $250,000 flood-damage policy on the home she shares with her husband. Relative newcomers like them -- they moved down from Maryland -- seem to be more likely to carry flood coverage than the native Floridians in their neighborhood, she said.

It’s a no-brainer, said her husband, John McLeod, a former employee of the National Oceanic and Atmospheric Administration. “All you have to do is watch the news and pay attention to history.”