A diminishing plurality of Canadians see Justin Trudeau as the best fit for dealing with U.S. President Donald Trump, eroding an advantage the Canadian leader has over his rivals as he prepares to seek re-election.

Asked which federal political leader is best suited to manage relations with the Trump administration, 36 per cent of respondents in a recent poll named the incumbent Liberal prime minister. But that’s down from 39 per cent and 41 per cent support for Trudeau in the previous two quarterly surveys.

Another 25 per cent said none of the leaders can best manage Trump, according to the Nanos Research poll conducted for Bloomberg News. The share of those dissatisfied with their options has steadily risen since the surveys began last June.

Conservative Leader Andrew Scheer, Trudeau’s closest rival, was the choice of 18 per cent of respondents, down slightly from previous results. No other party leader got more than 5 per cent.

“Trudeau’s numbers have been on the decline,” pollster Nik Nanos said by email Monday. “There’s a clear east-west split with Canadians in central and eastern Canada giving Trudeau stronger scores than his rivals, but Trudeau not receiving high scores in the energy-rich prairies and British Columbia.” 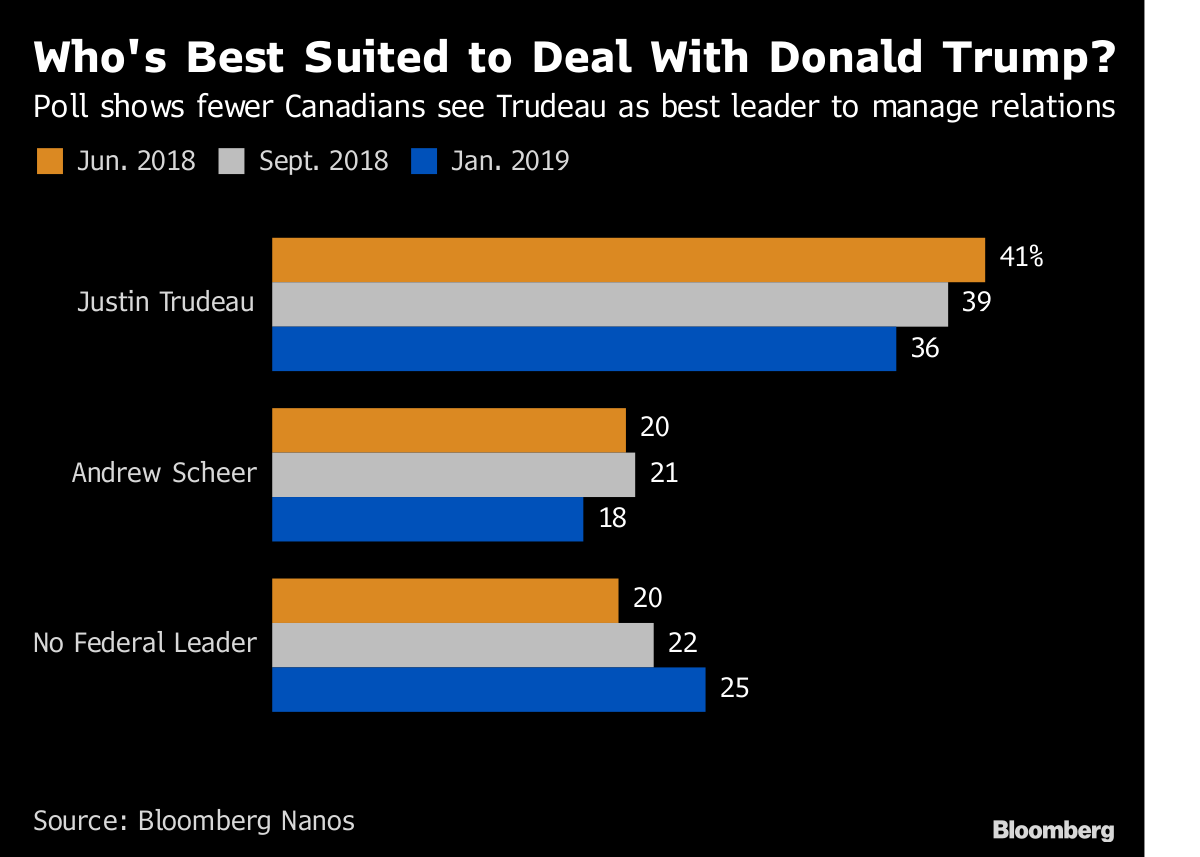 The results indicate that, ahead of an election in October, Canadians see a two-horse race when it comes to working with Trump, despite what has largely been a three-party system in parliament. The leader of the New Democratic Party, Jagmeet Singh, was chosen by just 2 per cent of respondents, relatively unchanged since the polling began. The former provincial lawmaker is running in a by-election for a seat in the federal legislature next month, after being elected to helm the left-leaning party in October 2017.

Maxime Bernier, a maverick former Conservative lawmaker who launched the upstart People’s Party of Canada last September in a potential boost for the Liberals, was chosen by 5 percent of respondents, unchanged from the previous poll. Green Party Leader Elizabeth May was chosen by 3 per cent, also unchanged.

Trudeau led in every sub-group of respondents and region, except for one: the energy-rich prairies, a region where Scheer’s party has wide support. Singh saw his highest score, at 4 per cent, in British Columbia, the Pacific coast province in which he’s seeking election.

The results are based on both telephone and online responses from 1,000 Canadians between Dec. 30 and Jan. 5. They’re considered accurate within 3.1 percentage points, 19 times out of 20.