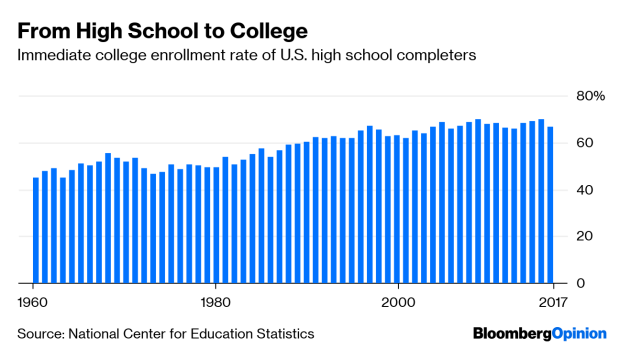 Some of this decline can be explained by demographics. Five percent fewer people graduated from high school in the Midwest in 2017-2018 than in 2009-2010, according to the Western Interstate Commission for Higher Education, and in and around shrinking, aging Gary — an industrial city that’s part of the Chicago metropolitan area — the downtrend may be even steeper.

A much bigger factor, though, seems to be the job market in the Chicago area, which is a lot healthier now than it used to be, with the unemployment rate down from 11.6% in March 2010 to 4.1% this March. “At our campus and similar regional campuses, it looks like every one-percentage-point change in the unemployment rate leads to a 5% change in enrollment,” says IU Northwest economics professor Micah Pollak. “The unemployment rate explains almost 75% of the variation.”

Gary is an especially blue-collar town, and Indiana an especially blue-collar state — manufacturing’s share of employment and gross domestic product is higher there than in any other state — so an economic recovery that has been good for manufacturing and other blue-collar jobs that don’t require a college education can perhaps be expected to have an especially strong effect on college enrollment there. But enrollment rates are down nationwide, too. According to the National Center for Education Statistics, the share of high school graduates going directly to college fell from an all-time high of 70.1% in 2009 to 66.7% in 2017.

This decline has affected some kinds of colleges much more than others. By far the hardest-hit has been the for-profit sector, which nearly quintupled in size in the 2000s, gained a bad reputation for saddling students with big debts for dubious credentials, and has been reeling since, with a 71% drop in enrollment from fall 2010 to fall 2016.

State and nonprofit private schools — which together account for 94% of higher-education enrollment in the U.S. — haven’t seen declines like that. But there has been a marked divergence between higher-status schools and lower-status ones. Within the Indiana University system, the flagship campus in Bloomington has seen a 2% increase in enrollment since 2011, while the commuter-oriented regional campuses such as IU Northwest have almost all experienced big declines. Nationwide, the enrollment rate is up for four-year colleges but down for two-year colleges.

Cyclical economic forces would again seem to explain most of this. At one end of the spectrum, better economic times mean that some high school graduates who a few years ago would have stayed close to home for school can now afford an on-campus four-year college experience. At the other end, the strong job market is giving those for whom the decision between attending college and immediately entering the workforce is the closest call lots of reason to choose the latter. In both cases, it is the for-profit schools, community colleges and commuter schools that lose out.

There do seem to be some noncyclical forces at work, too, though. “Student loan debt is a big issue,” Pollak says. That is, today’s 18- and 19-year-olds have heard a lot about the debt troubles of their elders and would like to avoid them. There are also indications that public confidence in higher education is down, and evidence that the wage premium conferred by a college degree has stopped rising and possibly fallen a little. The mantra of a decade or so ago that everybody needed to go to college is being critiqued as unrealistic and even counterproductive in an economy that still offers millions of solid jobs for those with only high school educations.

To be precise, according to a recent report from Georgetown University’s Center on Education and the Workforce, in 2016 there were 12.9 million American workers with a high school degree or less who had what the report defined as “good jobs,” with annual earnings of at least $35,000 for those 25 to 44 and at least $45,000 for those 45 to 65.

So that’s something! It is less, though, than the 15.7 million good jobs held by those with education beyond high school but short of a bachelor’s degree, and a lot less than the 36.3 million good jobs in the hands of people with bachelor’s degrees or more. The number of high-school-or-less good jobs has grown over the course of this economic expansion, and there are forecasts that demand for such workers will remain relatively strong over the next decade. But it is, and is almost certain to remain, a much narrower pathway to economic security than the ones that involve at least some college.

A lot of the high school graduates entering the workforce now may have plans to go to college eventually, after they’ve saved up some money and have a better idea of what they want to study. That sounds sensible enough, but a recent study of 6,717 people who graduated from high school in 1998 to 2003 — another period of very low unemployment, at least until 2001 — indicates that such an approach may not pay off. Those who delayed entry to college or never went, Yuxin Lin and Vivian Yuen Ting Liu of the Community College Research Center at Columbia University’s Teachers College found, ended up with much lower earnings after 15 years than students with similar characteristics who entered college straight from high school, with those who delayed college entry for seven years or more making less than those who never attended.

College isn’t for everybody. But in today’s U.S., it — broadly defined to include technical schools, certificate programs and the like — does appear to be a good idea for the overwhelming majority of young people, meaning that a strong job market that tempts them away from it is a mixed blessing. One statistic in particular from the Indiana University system made me a little sad:

Part of this is just demographics: As the population’s share of adults with at least some college experience grows, the share of prospective students whose parents didn’t go to college is falling. But Indiana University’s drop-off in first-generation enrollment over the past few years has been too sharp to be just that.(1) Kids whose parents went to college are weighing the various signals they’re getting from the labor market, college tuition rates, the media, politicians, their peers and their parents, and still deciding to go to college. Kids whose parents didn’t go to college have increasingly been arriving at the opposite decision. I’m not going to fault them for that, but I am maybe going to fault the rest of us for letting it happen.

(1) In the database for his book "Demographics and the Demand for Higher Education," Carleton College economist Nathan D. Grawe has a forecast, derived from the Census Bureau's 2011 American Community Survey, of the number of high school graduates with parents of varying education levels for every state from 2012 to 2029. For Indiana, the numbers of high school graduates with neither parent having a bachelor's degree decline 11.5% from 2012 to 2017, 6.3% from 2012 to 2018, and 15.6% from 2012 to 2019 (the year-to-year forecasts are pretty noisy at the state level), while actual enrollment of first-generation students has fallen 27% since 2012.