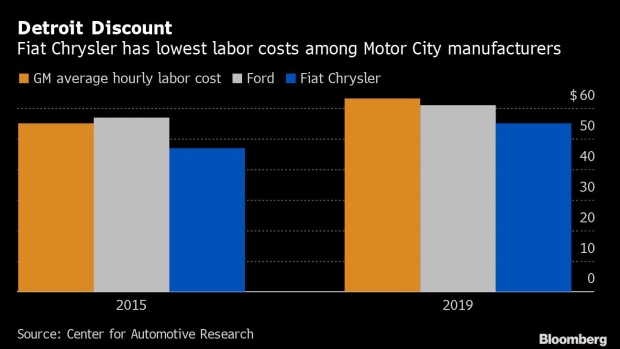 (Bloomberg) -- Fiat Chrysler Automobiles NV, the Italian-American automaker in the midst of merger talks, has little room to maneuver in negotiations with the United Auto Workers union that’s turned its attention to the company after securing new contracts with its U.S. rivals.

The UAW won’t want to hear pleas of poverty from a company that just forecast record profit and is mapping out a plan to join forces with France’s PSA Group. And whereas Ford Motor Co. had an easy time getting a deal done with the union, Fiat Chrysler faces risk of a General Motors Co.-style walkout unless it agrees to concessions that compromise its plum position as the Detroit carmaker with the lowest labor costs.

The UAW turned its attention to Fiat Chrysler after needing just five days to hammer out a contract with Ford late last month. Over the following two weeks, the union had an easy time ratifying the agreement, with 56% of members who cast ballots voting in favor. The ease with which the deal was reached stood in stark contrast to the bumpy process it took to clinch one with GM. The 40-day strike the UAW staged cost the company $2.9 billion of lost earnings.

As the last in line to bargain with the union, Fiat Chrysler likely won’t have a choice but to agree to richer wages and benefits packages secured from GM and Ford. Workers also have reasons to take a more combative approach than they just did with Ford. As is the case with GM, federal prosecutors have been arresting and charging current and former union and company officials for corruption that has tainted the perception of past contracts.

“If FCA does not try to follow the pattern, I think there is a significant possibility of a strike,” said Arthur Wheaton, director of the Worker Institute at Cornell University.

The fate of temporary workers, who make up 13% of Fiat Chrysler’s unionized workforce -- more than either of its crosstown rivals -- is expected to be a major sticking point in negotiations. They’ve been key to helping the company keep a lid on labor expenses: its average hourly labor costs -- including wages, benefits, workers compensation insurance and payroll taxes -- were $55 in 2019, compared with $61 at Ford and $63 at GM, according to the Center for Automotive Research.

Fiat Chrysler faces “significant strike risk” if it doesn’t match the concessions GM made to temporary and “in-progression” employees who started at a lower wage after 2007, Bank of America Merrill Lynch analyst John Murphy wrote in a Nov. 15 note.

“Gains by these two groups of workers, if applied to FCA, would materially increase cost, possibly a hit to operating margins in the range of 300 basis points, and could significantly shrink FCA’s labor advantage over its rivals Ford and GM,” Murphy wrote.

Fiat Chrysler workers sent union leaders back to the bargaining table in 2015 to secure bigger signing bonuses for senior workers and raises for shorter tenure employees. Many unionized staff see that as evidence they can push the company harder again, some union officials say.

Ratification may also be complicated by the ongoing Justice Department probe that so far has led to indictments of Fiat Chrysler’s ex-vice president of employee relations and the former top UAW official representing the company’s workers. Acting UAW President Rory Gamble will oversee negotiations after his predecessor, Gary Jones, stepped aside earlier this month amid reports that have implicated him in the years-long corruption scandal.

If Fiat Chrysler wants to avoid higher structural costs as it negotiates terms of a merger with PSA, it will have to offer a much higher signing bonus than last time, Wheaton said. The company paid senior workers a $4,000 bonus in 2015, half what GM’s workers got.

The automaker “would do well to buy more labor peace in cash upfront instead of having fixed costs,” he said.