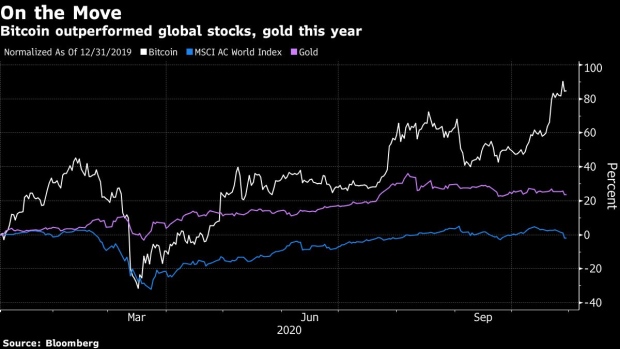 (Bloomberg) -- A new partnership for Fidelity Digital Asset Services aims to facilitate the growing interest in cryptocurrencies among Asian investors.

Stack Funds, which is based in Singapore and provides access to crypto products, will make FDAS’s secure custody services available to its clients in a bid to meet increasing demand from Asia’s high-net-worth investors and family offices, according to a statement.

Stack says all assets it secures will be subject to monthly audits, and promises protections like insurance coverage as well as weekly contributions and redemptions. The firm aims to appeal to investors in the region with risk mitigation and the attraction of Fidelity’s involvement, Michael Collett, Stack’s co-founder, said in an interview.

“There is a critical need for platforms which have a deep understanding of what local and regional investors are looking for” that “has historically been lacking in the digital asset space,” Christopher Tyrer, head of Fidelity Digital Assets Europe, said in the statement.

Fidelity Investments has moved into digital assets earlier than many other large financial institutions. It disclosed in August that it was starting a passively managed Bitcoin fund for wealthy investors. The firm started Fidelity Digital Assets in late 2018, with CEO Abigail Johnson declaring the goal was to boost accessibility for investors.

Cryptocurrencies have been taking off again after a tough time at the beginning of the year. Bitcoin reached the highest level since January 2018 on Wednesday.

Proponents of digital assets say growing institutional interest is complementing retail buying. Recently, Paypal Holdings Inc. moved to give customers access to crypto, and JPMorgan Chase & Co.’s JPM Coin was used to make a payment for the first time, according to reports.

“This year has been tough as far as getting people into Bitcoin because it didn’t cover itself with glory in the market downturn,” Collett said. But “since the dark-dark days of March we’ve had inquiries pick up again,” he added.