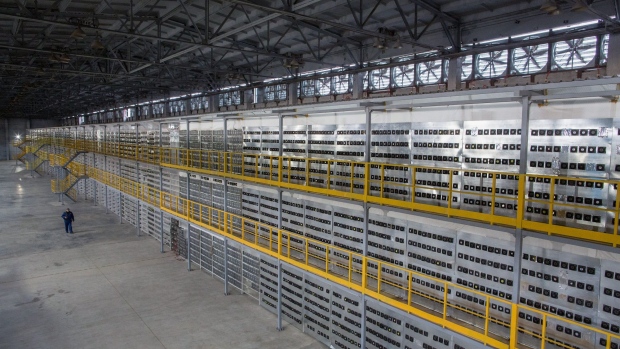 An armed guard patrols inside the BitRiver Rus LLC cryptocurrency mining farm in Bratsk, Russia, on Friday, Nov. 8, 2019. Bitriver, the largest data center in the former Soviet Union, was opened just a year ago, but has already won clients from all over the world, including the U.S., Japan and China. Most of them mine bitcoins. Photographer: Andrey Rudakov/Bloomberg , Bloomberg

(Bloomberg) -- Fidelity Digital Assets will allow its institutional customers to pledge Bitcoin as collateral against cash loans in a partnership with blockchain startup BlockFi.

The unit of Boston-based asset manager Fidelity Investments will hold the digital asset and not make loans itself, Tom Jessop, president of Fidelity Digital Assets, said in an interview. The target is Bitcoin investors who want to turn their digital stash into cash without selling, and potential customers include hedge funds, crypto miners and over-the-counter trading desks, Jessop said.

The new service from Fidelity comes after Bitcoin beat its 2017 highest price earlier this month before retreating in recent days. The world’s most valuable digital asset has risen 164% this year, hitting a high of $19,462 on Dec. 3. It traded Monday at about $18,880. Other cryptocurrencies like Ether and Litecoin have also seen gains.

Holding Bitcoin to back loans is “a foundational capability,” Jessop said. “As the markets grow, we’d expect that this becomes a fairly important part of the ecosystem.”

Fidelity said institutional-investor interest in digital currencies is rising. A survey the asset manager conducted earlier this year found 36% of respondents held crypto in their portfolios. More than six out of 10 expressed interest in Bitcoin and other cryptocurrencies, up from 47% in a 2019 survey.

Fidelity began a Bitcoin custody service last year but this is the first time it’s allowing the coins to be used as collateral. To get a loan, a Fidelity customer will have to have an account with BlockFi.

While Jessop said he envisions the loans to be longer-term than a typical repo trade, they’re still of a type -- a tri-party agreement -- that’s familiar to everyone on Wall Street. “We want to to develop a world-class brokerage capability for assets of all types,” he said.

Crypto is being accepted for more mainstream financial uses, such as Visa credit cards that offer Bitcoin rewards and PayPal Holdings Inc., which allows customers to use the digital asset at the 26 million merchants on its network.

BlockFi will risk-manage the famous volatility of Bitcoin by offering cash worth 60% of a loan backed by the digital asset, said Chief Executive Officer Zac Prince. “However, the program has room for client-level customization and may be adjusted to meet the needs of large firms,” he said.