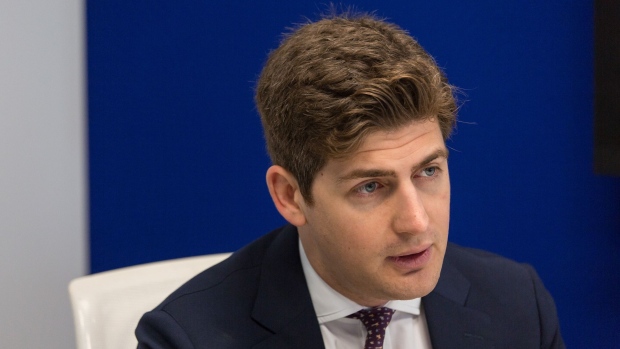 A Japanese 10,000 yen banknote arranged at a branch of Resona Bank Ltd. in Tokyo, Japan, on Tuesday, Aug. 9, 2022. Dollar-yen, which soared 38% from a March 2020 trough to mid-July this year, is in retreat. Photographer: Kiyoshi Ota/Bloomberg , Bloomberg

(Bloomberg) -- The world is careening toward recession and buying old haven reliables Treasuries and the yen still offers the best protection, according to Fidelity International.

“Our view is a hard landing is going to happen,” said George Efstathopoulos, money manager at the investment giant in Singapore. “We are looking for convexity trades that should do well in a hard landing -- both long-dated Treasuries and yen should,” he said.

Treasuries currently make up about 2% of the firm’s global multi-asset income fund, up from zero just a few months ago, Efstathopoulos said. He’s also buying the yen -- a currency wallowing near a 24-year low thanks to the widening yield gap between policy rates in the US and Japan -- as both assets currently look “cheap.”

Fidelity International joins JPMorgan Asset Management and Jupiter Asset Management in buying Treasuries on bets a recession is a virtual certainty. The bullishness comes despite the securities handing investors a record 12.4% loss this year as the Federal Reserve aggressively hikes interest rates to combat the fastest inflation in a generation.

Efstathopoulos, whose $7.7 billion fund lost 13% in the year to Aug. 31, said Treasuries are displaying haven qualities once more after their rout. Yields on 30-year bonds have doubled since the start of the year, while those on 10-year securities have climbed as high as 4.02% from a 2022 low of 1.53%.

The income generated from US bonds is now “way more attractive,” said Efstathopoulos, who has been funding the purchases with proceeds from selling holdings in Chinese government debt.

Fidelity International is also expecting the yen to outperform as soon as the global downturn is in full swing.

But unlike BlueBay Asset Management LLP, which has long yen positions on wagers the BOJ will be compelled to relinquish its grip on bond yields, Efstathopoulos says the currency is so beaten down it can only bounce back when the Fed finally starts cutting rates amid a recession.

“The big driver would be exogenous,” he said of the yen’s recovery. “It will be a Fed pivot because of a hard landing. That’s going to give a big bid to the yen.”

Here are some of his comments:

Markets might test parity between the pound and dollar, and that should deliver a tailwind for UK large caps. We continue to expect ongoing depreciation in sterling even at these levels. The politics, credibility issues are still there.

Given much higher debt levels, real yields cannot rise much faster, much higher from here because that’s a huge burden for the government. If we were to see high real yields from here, expect further multiple correction driven purely by that.

Chinese equities can perhaps do better than other markets in the next 12 months or so. We like to be closer to where the stimulus is coming through -- some of the more renewable infrastructure areas are looking definitely more interesting. We’ve also done a little bit of state-owned enterprise properties. There will be long term winners out of this, but it’s going to be very volatile sort of trade.

From an EM perspective, rates are looking a lot more attractive, while FX is looking sort of more vulnerable. We like bonds, especially in places like Brazil where you’re getting 3% real yields.