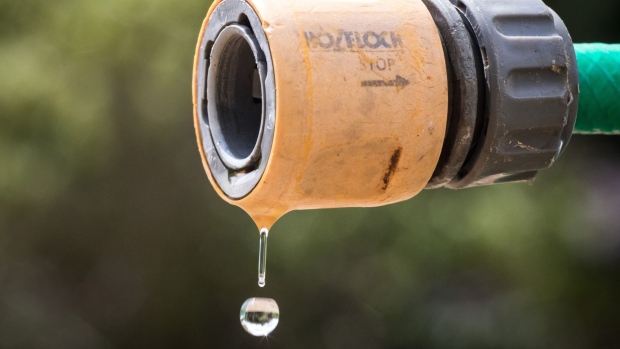 BATH, ENGLAND - JULY 23: A hosepipe waters dry grass on a lawn in a garden in the village of Priston on July 23, 2018 near Bath, England. Seven million residents in the north west of England are currently facing a hosepipe ban due to the heatwave and water companies in other areas of the UK are continuing to urge customers to to be use water wisely in the ongoing hot, dry conditions. (Photo by Matt Cardy/Getty Images) , Photographer: Matt Cardy/Getty Images Europe

A fifth water company is to stop consumers from irrigating their gardens or washing their cars as England struggles to cope with its drought, despite impending thunderstorms.

It comes after a drought was officially declared at the end of last week covering eight of 14 areas across much of western, southern, central and eastern England. Thunderstorms are forecast across much of the UK today but the rainfall, while threatening floods, is not expected to significantly replenish water reserves.

Drought Is Declared in England: So What Happens Next?

The country suffered its driest July in almost a century, while temperatures exceeded 40 degrees Celsius (104 degrees Fahrenheit) for the first time. The previous eight months were the driest since 1975-76, according to the Met Office.

“Due to the extremely hot and prolonged dry weather, we believe the right thing to do is to introduce a Temporary Use Ban,” said Lisa Gahan, a director at South West Water. The decision will allow “rivers and reservoirs to recharge over the winter months,” she said.