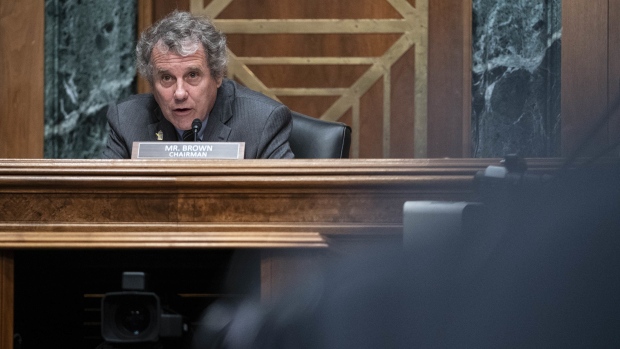 Senator Sherrod Brown, a Democrat from Ohio and chairman of the Senate Banking, Housing, and Urban Affairs Committee, speaks during a hearing in Washington, D.C., U.S., on Tuesday, Oct. 19, 2021. The rise of digital currencies and a decline in the use of the dollar by U.S. adversaries are driving calls for a more multilateral approach to sanctions policy at the Treasury Department as the U.S. tries to keep up with changes in the global financial system. , Bloomberg

(Bloomberg) -- President Joe Biden’s attempt to salvage the centerpiece of his economic agenda has revived some of the same battles among Democrats over the same tax and spending proposals that have bedeviled the plan for months.

Democrats are risking their own defeat in the midterms and Biden’s presidency itself if they can’t unify behind a social spending plan, reversing a string of legislative failures in late 2021 and early this year.

Key Senate holdout Joe Manchin of West Virginia says he wants talks to start from scratch and doesn’t know how long negotiations ultimately will take. But time is of the essence for congressional Democrats clinging to slim majorities in the House and Senate.

Biden on Wednesday suggested the $2 trillion package could be broken into “chunks” with some elements -- including the now-expired expanded child tax credit -- set aside for now. But many congressional Democrats aren’t willing to abandon the tax credit, which has emerged as one of the biggest hurdles in negotiations.

Senate Banking Chairman Sherrod Brown said he will “fight like hell” for the child tax credit during an interview with Bloomberg TV’s “Balance of Power with David Westin.”

In his home state of Ohio, Brown said 92% of families with children benefited from the credit, which last year sent parents monthly payments of as much as $300 per child.

“It lifted 40% of kids out of poverty,” Brown said. “It’s relieved so much anxiety for so many working-class and middle-class families and poor families.”

Senate Finance Committee Chairman Ron Wyden also pushed back on any suggestion the CTC could be dropped from the package.

“The child tax credit is even more important now, because it’s a tangible benefit that people get when they’re dealing with extra expenses as a result of the new variant,” he said, referring to the resurgent coronavirus pandemic.

Manchin has said continuing the credit will contribute to soaring inflation and has raised concerns about the lack of work requirements for claiming it. On Thursday, he told reporters he wouldn’t negotiate in the press.

The White House, which views Manchin as the linchpin for a deal, took a similar approach.

“We’ve got to figure out what we can get in a big chunk of a package to get it across the finish line, but I’m not going to negotiate from here,” White House press secretary Jen Psaki said Thursday.

A Senate Democratic aide called the enhanced child tax credit a long shot in any future bill. Still, senators are discussing cutting the credit’s cost by adding work requirements, shrinking the amount and phasing it out faster for higher incomes, the aide added.

“The approach that will work is coming up with a bill that will get Senator Manchin’s support and that’s what we are working on,” Virginia Democratic Senator Mark Warner said Thursday when asked about the child tax credit.

Senator Michael Bennet, a Colorado Democrat, said he’s willing to tighten the income cap for the benefit, noting he has supported a $150,000 cap in the past. But, underscoring how difficult negotiations will be with Manchin, Bennet said he would be “very very reluctant” to stop payments to those without income tax liabilities.

Ways and Means Chairman Richard Neal, the top tax writer in the House, likewise said he will still fight for the tax credit and is willing to change the proposal to get Manchin on board.

“The child credit is very popular in the Democratic caucus,” Neal said on Thursday. “I am certainly not ready to throw in the towel on it.”

Neal said the next step is to get Manchin to specify what he supports.

Manchin on Thursday reiterated he is willing to negotiate on economic policy. But he stressed that Democrats must start over with a “clean sheet.”

House Speaker Nancy Pelosi told reporters her approach now will be to scale the bill back.

“It may be more limited, but it’s still significant,” she said.

Pelosi stressed that passing a series of bills -- rather than one package -- isn’t possible, given the Senate’s limited ability to draft so-called budget reconciliation bills that avert a GOP filibuster.

“This is a reconciliation bill. So when people say let’s divide it up, they don’t understand the process,” she said.

Passing several bills would also be a challenge within the House, where Democrats can only afford to lose four lawmakers on any party-line vote.

House moderates and progressives, who have long been at odds over priorities for the bill, remained divided on Thursday.

Pennsylvania Representative Susan Wild said she is pleased that Biden is going with a more targeted approach.

“My position is that we move full steam ahead on things we can get passed and not that we continue to knock our head against the wall,” Wild said. “I doesn’t seem like there is a path forward for the child tax credit.”

Moderate Elissa Slotkin of Michigan also said she favors finding the handful of policies that can be agreed upon and passing them now.

But progressive Jamal Bowman of New York said he would resist cuts to the House-passed $2 trillion bill.

“We are not interested in a slimmed- down Build Back Better package,” he said.

Lawmakers leave Washington Thursday for a recess stretching to February, leaving little time to hash out a deal on the Biden agenda before the president’s State of the Union address on March 1.