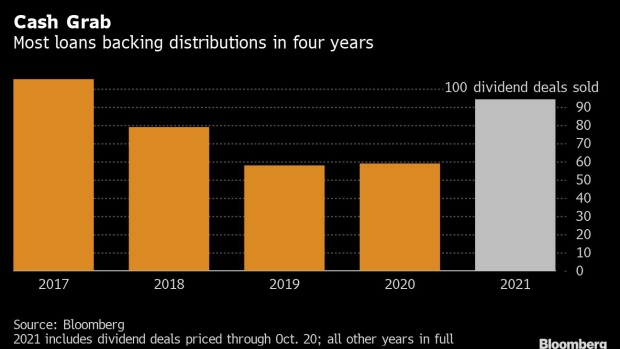 (Bloomberg) -- Mixed-martial arts promoter UFC Holdings LLC sold a $600 million leveraged loan on Wednesday to fund a distribution to its parent company, as 2021 continues to be the biggest year for dividend deals in four years, according to data compiled by Bloomberg.

UFC’s is the fourth loan sold in October to fund a distribution, bringing the year-to-date total to 94. That’s the most such deals since 2017 with 105.

Loans for dividends are usually not favored in the market, since they increase companies’ leverage with the benefit going mostly to sponsors and not investors. But demand for the floating-rate class, fueled by record CLO issuance, continues and gives borrowers the chance to make opportunistic deals.

UFC’s new deal is an add-on to an existing loan maturing in 2026. The deal firmed at 275 basis points above the London interbank offered rate, the same as its existing loan, with an original issue discount of 99.05.