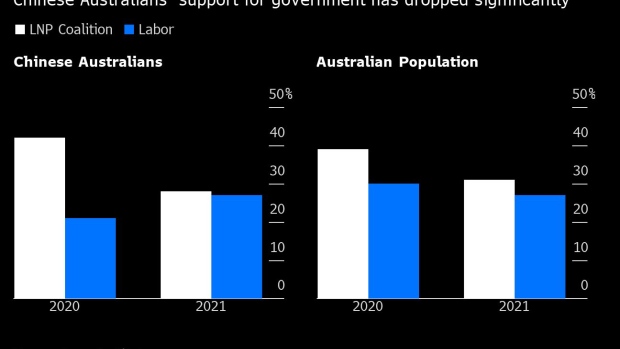 Shoppers enter a grocery store in Box Hill within the Chisholm electorate in outer Melbourne, Victoria, Australia, on Friday, 13 May. , 2022. , Bloomberg

(Bloomberg) -- Prime Minister Scott Morrison has been one of the world’s most outspoken leaders in pushing back against China, and many Australian voters share his concerns. But the tough language could end up hurting more than helping him in key seats that may swing Saturday’s election.

One of them is Chisholm in the eastern suburbs of Melbourne, where one in five people are of Chinese descent. Morrison’s center-right Liberal National coalition took the electorate by a margin of just 0.6% three years ago en route to a narrow election win, and he needs to repeat the feat to pull off another come-from-behind victory.

The streets of Box Hill, one of 10 suburbs that make up the Chisholm seat, are filled with Chinese medicine stores and acupuncture businesses that wouldn’t be out of place on the streets of Hong Kong or Beijing. Many of the shop signs are written in both English and Chinese dialects in the suburb, which sits about a half-hour train ride from central Melbourne.

Alan Qu, a 38 year-old real estate agent in Box Hill, voted for Morrison’s coalition back in 2019. But now he’s undecided heading into the election, mainly due to the Australian leader’s ramped-up anti-China rhetoric.

“If you don’t like your boss, you still get a salary,” Qu said, referring to the relationship between Australia and China. “You don’t have to have to tell them, ‘I don’t like you, you’re bad.’”

The dynamics in Chisholm show the difficulty Morrison has faced in turning a key foreign-policy credential into a winning election issue, even as Pew Research found that negative views of China among Australians rose to 78% last year from 57% in 2019. Polling has shown that the rising cost of living is a far bigger concern for voters, with consumer price gains at the highest in two decades.

Another reason is because the opposition Labor party, which has steadily led in the polls, has sought to blunt any advantage for Morrison by adopting a similar China policy -- only with softer language aimed at appealing to the ethnic Chinese citizens who make up more than 5% of the population, one of the world’s largest diasporas.To be sure, Australia’s ethnic Chinese population is incredibly diverse, with thousands coming from Malaysia, Singapore and Taiwan. Not all are fans of the Communist Party -- many immigrants fled after the Chinese military fired on protesters in Tiananmen Square in 1989 -- and plenty support Morrison’s strong language against Beijing.

But polling conducted by the Lowy Institute found that support for the government among Australians of Chinese heritage dropped 14 percentage points last year to 28%, faster than its popularity declined among the broader population.

Seats where Chinese Australians made up more than 10% of the voters could alone decide who is the next prime minister, according to Osmond Chiu, a Sydney-based research fellow at the Per Capita think tank.

“There’s a real sense there has been a massive shift over the past year,” he said. “That has coincided with this sort of toughening rhetoric and the spectre of the threat of China being raised in an electoral context.”

Relations between China and Australia have fallen to new lows since 2018, when Australia became the first country to ban telecoms giant Huawei Technologies Co. from its 5G wireless networks and also passed foreign interference laws in a move widely seen as targeting China. The government recently toughened such rules in universities following the harassment of Hong Kong protesters on Australian campuses.

Ties with Australia’s largest trading partner got even worse during the pandemic. Morrison called for an investigation into the origins of the coronavirus in 2020, a politically sensitive subject for China, where the outbreak first came to light. In response, Australian exports into China began to face hurdles including investigations, custom delays and high tariffs.

More recently, China’s signing of a security pact with the Solomon Islands sparked a national uproar and spurred Defense Minister Peter Dutton to warn that Australia should prepare for eventual war in the region. Just last Friday, he held a snap press briefing to tell the public that a Chinese surveillance ship had been tracking Australia’s coastline for the past week.

Morrison has made national defense a key part of his re-election pitch, labeling opposition leader Anthony Albanese soft on Beijing and implying that only he was tough enough to stand up to Chinese leader Xi Jinping. He also labeled Labor’s deputy leader a “Manchurian candidate” -- a comment he later withdrew.

“China’s growing power and influence are a geostrategic fact,” Morrison said in a speech in March. “What we care about is how Beijing uses its strength. There’s no doubt that China has become more assertive, and is using its power in ways that are causing concern to nations across the region and beyond.”

Labor has sought to stick closely to the government on its policy towards China, determined not to give Morrison any leverage to accuse it of weakness. Speaking on Friday, shadow foreign minister Penny Wong said China alone was responsible for the deteriorating relations between the two countries.

“To be very clear, an Albanese Labor government would not take a backwards step when it comes to standing up for Australia’s interest, in this relationship or in any other relationship,” she said.

But it’s the government’s fighting talk that has been causing most concern for Chinese Australian voters, and not just in Chisholm. Some other electorates with high such Australian populations are also vulnerable government seats.

In neighboring Kooyong, where Treasurer Josh Frydenberg is fighting to keep his seat against an independent challenger, more than 11% of the population is ethnically Chinese. A poll last week projected him losing the seat. Up the coastline in New South Wales, the must-win government seats of Bennelong, Reid and Banks all have large Chinese Australian populations.

“What the Labor party have signaled they would do differently is a matter of tone,” said Natasha Kassam, director of the Public Opinion and Foreign Policy Program at the Sydney-based Lowy Institute. “They accuse the current government of having employed divisive rhetoric to demonstrate how tough they are on China, and they claim that the government has been using antagonism towards China for domestic political purposes.”

Morrison has personally visited Chisholm during the campaign, appearing alongside incumbent member of parliament Gladys Liu for a church service over the Easter period. And last Friday, he toured a manufacturing plant with her, chatting with workers and even trying his hand at soldering a circuit board. Morrison praised Chinese Australians profusely during his visit, saying they were some of the country’s “greatest patriots.”

While at the plant, Liu avoided answering a question from Bloomberg on whether Chinese Australians were being turned off by the prime minister’s harsh rhetoric, replying that it was “divisive” to try to draw a distinction between ethnically Chinese voters and the general population. Labor’s candidate for Chisholm, Carina Garland, didn’t respond to requests for an interview.

Most Chinese Australians from the area who spoke to Bloomberg said they remained undecided. All of them flagged the economy as one of their most important issues, and several leaned toward Morrison and his party as economic managers. But almost all expressed some unease with the deteriorating ties between Australia and China.

Many Chisholm voters who spoke to Bloomberg said they were still leaning toward voting for the government despite their discomfort with Morrison’s rhetoric. And at least one was very supportive of Morrison’s approach toward Beijing.

One woman, who asked to remain anonymous as she still had relatives in Shanghai, said standing up to the Chinese government was the only way to make the authorities understand you were serious. “All these Western people should do things like Scott Morrison,” she said.

Still, others said Morrison needed to be clearer in his language, and differentiate between his criticism of the authoritarian Chinese government and the Chinese people themselves.

Robert Gu, who runs an importing business, said it was “really important” for Morrison to be more careful with his rhetoric.

“The Chinese people are very nice,” he said. “The government is different.”