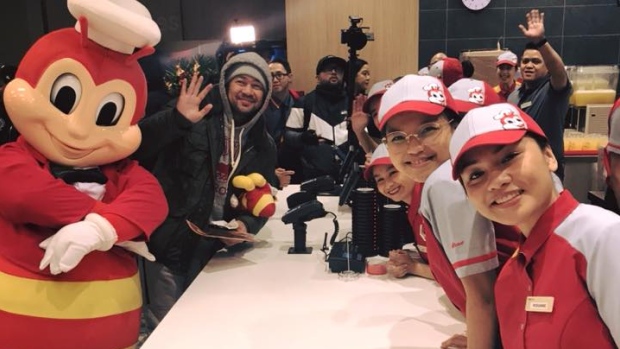 TORONTO -- A Filipino fast-food chain restaurant opened the doors to its first Toronto location this weekend to a long line of fans, some who waited hours, to taste the brand's chicken, burgers and sweet-style spaghetti sauce and noodles.

Jollibee Foods Corporation's aggressive international expansion includes a focus on Canada, where Filipino food is seeing a rise in visibility with several higher-end Filipino restaurants opening in recent years, as well as a major grocery store catering to cooks of the cuisine.

Jollibee had 978 Jollibee restaurants in the Philippines by the end of 2016, according to its most recent annual report, as well as 167 international stores spread across the United States, Vietnam, Brunei, Hong Kong, Singapore and the Middle East.

That year, the chain also opened its first Canadian spot in Winnipeg.

"Despite the freezing Canadian winter, thousands still flocked to the store and waited overnight just to get a taste of their Jollibee favourites," the report reads.

Since then, that has grown to another Winnipeg location and, as of April 1, a long-awaited Toronto store.

A man named Paul was the Scarborough store's first customer, according to Jollibee Canada's Facebook page, and he sampled the crispy chicken for the first time in six years. He, along with the next 39 customers in line who spent more than $30, won one six-piece bucket of Jolly crispy chicken each month for a year until April 2019.

The grand opening saw customers buying bucketfuls of the crispy chicken and taking photos with the chain's mascot, a red and yellow bee. The last customer of the work day was served just before 2:30 a.m. ET.

The Philippines was the no. 1 country of birth of recent immigrants to Canada, according to figures from Statistic Canada's 2016 census, with 188,805 people or 15.6 per cent of all recent immigrants being born there.

Toronto's Queen West neighbourhood has been home to Lamesa Filipino Kitchen since 2014. The team behind the restaurant opened Lasa by Lamesa, a fast-casual spot, in September 2016. Its mission is "to share Filipino food with the mainstream."

Before opening, the company said it primarily targets communities with a large Filipino population, so Canada made good business sense