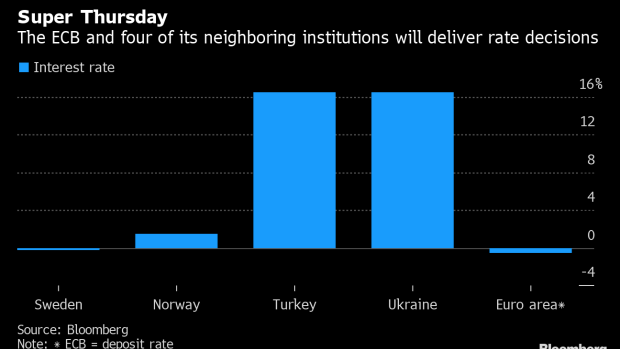 (Bloomberg) -- Mario Draghi’s farewell press conference as European Central Bank president will cap a morning of monetary action across the region that illustrates the struggle for policy makers in coping with a worsening global outlook.

The five decisions due on Thursday start with Sweden’s Riksbank, whose efforts in exiting the twilight zone of negative interest rates are getting thwarted by the prevailing force of a slowing world economy. Norway’s central bank is then likely to keep borrowing costs unchanged, maintaining a halt after three increases this year.

Both Ukraine and Turkey are probably poised to simultaneously unveil monetary easing at noon London time, 45 minutes before the ECB then reiterates the ultra-loose policy stance that Draghi insisted on pursuing at a contentious decision in September.

The gloomy prospects guiding those decisions were underscored this month by the International Monetary Fund, which made the fifth consecutive cut to its forecast for global economic growth -- as it predicted the weakest expansion in a decade. Next Wednesday, the Federal Reserve may take more action itself to steady the U.S. economy.

“Another rate cut next week seems highly likely,” Andrew Wilson, co-head of global fixed income at Goldman Sachs Asset Management, told Bloomberg Television. “Beyond that, we’ll go back to being data dependent, and seeing how much not just the U.S. economy slows, but the rest of the world slows as well.”

Sweden’s central bank is keen on ending almost half a decade of negative rates, but the economic slowdown and more stimulus from its big brothers -- the Federal Reserve and the ECB -- aren’t supporting its plans. Governor Stefan Ingves and his colleagues will therefore likely push back on tightening until next year.

Read more: Riksbank to Cling to Hiking Plan in Bet Recession Will Be Dodged

The Oslo-based bank is expected to keep rates unchanged and repeat its outlook that the policy rate “will most likely remain at this level in the coming period.” This is an interim meeting and doesn’t include any updated economic forecasts or a press conference.

Economists gauging Turkey’s decision predict anything from a cut as large as 225 basis points to no change at all, an illustration of the unpredictability of the environment there. The median forecast of analysts surveyed by Bloomberg is for a 100 basis-point reduction.

Slowing inflation and the easing of political tensions with the establishment of a secure zone in northern Syria, where Turkish forces have intervened, have given policy makers some room to stimulate the economy. But analysts and officials still anticipate price growth will pick up again, limiting the scope for further cuts.

Ukraine is set to forge ahead with interest-rate cuts after inflation slowed and a London court provided good news on the fate of the country’s biggest lender, whose future is key to the approval of billions of dollars of foreign aid.

Concluding eight years at the helm of the ECB, Draghi may elaborate on the institution’s plans for debt purchases, the most controversial aspect of the stimulus he pushed through last month. He is also likely to intensify his calls for fiscal aid from the region’s governments to complement monetary policy, a campaign which former IMF chief Christine Lagarde may need to widen when she succeeds him on Nov. 1.

To contact the reporter on this story: Craig Stirling in Frankfurt at cstirling1@bloomberg.net

To contact the editors responsible for this story: Simon Kennedy at skennedy4@bloomberg.net, Zoe Schneeweiss, Brendan Murray