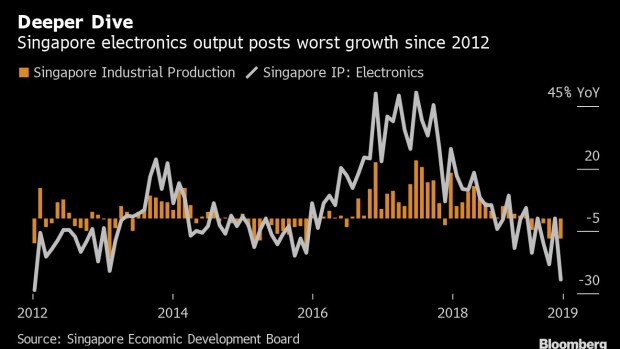 (Bloomberg) -- The guardians of the world economy head to Washington this week under the cloud of a slowing world economy.

The annual meetings of the International Monetary Fund and World Bank kick off with the new leaders of both expressing concern over the outlook. IMF Managing Director Kristalina Georgieva is already hinting her economists will on Tuesday cut their projections for global growth from 3.2% this year and 3.5% next year.

That will be the fourth downgrade since last October and reflects what Georgieva last week called a “synchronized slowdown” in which 90% of the world is experiencing weakening demand.

The question for central bankers and finance ministers is what can they do to prop up their economies. Much will depend on the path of the trade talks between the U.S. and China, which on Friday ended in a partial agreement. That doesn’t mean, though, that a curtain is being drawn on the uncertainty President Donald Trump’s trade wars have brought to the global economy.

Here’s what happened last week and below is our weekly wrap of what’s going on in the world economy this week.

Federal Reserve Chair Jerome Powell is not scheduled to appear in public this week, meaning investors will have to wait for any signs from the very top of the central banks as to whether it’s will cut interest rates this month for a third time this year. Several regional Fed presidents will though take to the microphone. Atlanta’s Raphael Bostic, Kansas City’s Esther George, Sam Bullard of St. Louis and Mary Daly of San Francisco all talk Tuesday. Chicago’s Charlie Evans and John Williams of New York follow Wednesday. Robert Kaplan of Dallas, Vice Chairman Rich Clarida and Neel Kashkari of Minneapolis speak Friday.

The Fed’s Beige Book comes out on Wednesday giving a snapshot of economic conditions across the nation. That is published hours after retail sales data for September with economists predicting another month of modest growth. Industrial production may have contracted the same month, underscoring recession fears, a report is forecast to show on Thursday.

Industrial production for the euro area will be released on Monday, giving another indication of how the German slowdown has marred overall growth. Meanwhile, multiple European Central Bank officials may use the IMF meetings to extend the recent spat over stimulus. In the U.K., labor market, inflation and retail sales data will illustrate the economic backdrop during a crunch political week as another Brexit deadline looms and an extension or deal remains clouded in doubt.

Israel’s inflation on Tuesday is likely to stay below the central bank’s target range of 1% to 3%, showing why a rate cut to near zero is in the cards. A financial crisis may be looming in Lebanon as pressure on the currency peg mounts and investors increasingly ask how long the government can continue to repay its debts. In Ghana, September inflation data will be out on Wednesday.

Argentina’s government will start publishing a final round of key economic indicators before the Oct. 27 presidential election. September consumer price figures are due on Wednesday, and economists surveyed by the central bank expect a month-on-month jump of 5.8%, which would be the biggest in a year. A delegation of Argentine officials will head to Washington for the IMF meetings. Tensions have risen between them and the lender since they signed a record $56 billion credit deal in 2018.

A raft of data out of China will likely show an economy that’s hurting: GDP growth probably slowed further in the third quarter, exports continued to contract and producer prices are deflating again. In Hong Kong, Chief Executive Carrie Lam will set out her economic policy objectives in a key speech, coming against the backdrop of a worsening political crisis and deepening economic slump.

To contact the editors responsible for this story: Stephanie Flanders at flanders@bloomberg.net, Zoe Schneeweiss