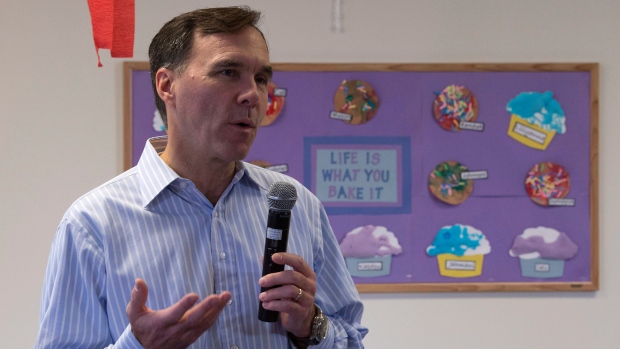 Minister of Finance Bill Morneau speaks with the media after touring a daycare centre for young mothers Wednesday October 25, 2017 in Ottawa. , The Canadian Press

Finance Minister Bill Morneau says he'll donate to charity all the money he's pocketed as a result of any increase in the value of shares in his family business since he was elected two years ago.

Morneau reiterated Thursday his plan to sell all of his roughly one million shares in Morneau Shepell, which are worth an estimated $21 million, and put all his other considerable assets in a blind trust.

And in a bid to finally spike opposition accusations that he's personally profited from some of the decisions he's taken as finance minister, he went one step further: he announced he will donate to charity the difference in the value of those shares between the date he was elected in 2015 and the day they're sold.

Morneau made the announcement in the House of Commons after meeting with federal ethics commissioner Mary Dawson. He said later that she agreed this additional action was "appropriate."

Morneau said he doesn't know how much his decision will wind up costing him, but it could be as much as $5 million.

"Whatever the value is, that's our decision.... My goal is to make sure that I'm doing the work that I came here for," he said outside the Commons.

"For me, the work that I'm doing right now is the most important work that I will ever do and I want to make sure that Canadians have confidence in that work ... Taking these extra steps to give absolute assurance is important."

The announcement did little to quell opposition accusations that Morneau's failure to divest his Morneau Shepell shares or put them in a blind trust when he first took office two years ago put him in a blatant conflict of interest.

Conservative finance critic Pierre Poilievre also pointed out that the donation will entitle Morneau to claim a charitable tax deduction. He suggested Morneau should donate those tax savings to lower the multi-billion-dollar federal deficit.