Canadians say they are worse off today than a year ago at rates never seen: Shachi Kurl

Canadian households are reporting a sharp deterioration of their finances amid escalating inflation and rising interest rates, polling data show, a worrying development that may foreshadow an economic slowdown.

The number of Canadians who say their finances are worse today than a year earlier has reached 41 per cent, according to weekly telephone polling by Nanos Research for Bloomberg News. That’s the second highest reading for this question in surveys going back to 2008. A separate poll released by Angus Reid on Tuesday found 28 per cent of Canadians believe their finances will continue worsening over the next year -- also a record high for this question.

The crumbling financial picture will cast doubt over how well the nation’s households are coping with the impact of higher inflation, and whether consumers can continue driving the nation’s expansion forward. Most economists anticipate Canada’s economy will produce strong growth throughout 2022 because consumer spending is expected to remain robust.

One factor could be falling real incomes, with average wages in Canada growing at only about half the rate of inflation, which has accelerated to the fastest pace in three decades. Indebted Canadians are getting hit by higher interest rates, as the Bank of Canada tightens monetary policy to cool price pressures.

Households are also facing the prospect of a sharp slowdown in housing, which has been a major source of new wealth throughout the pandemic for many home owners. 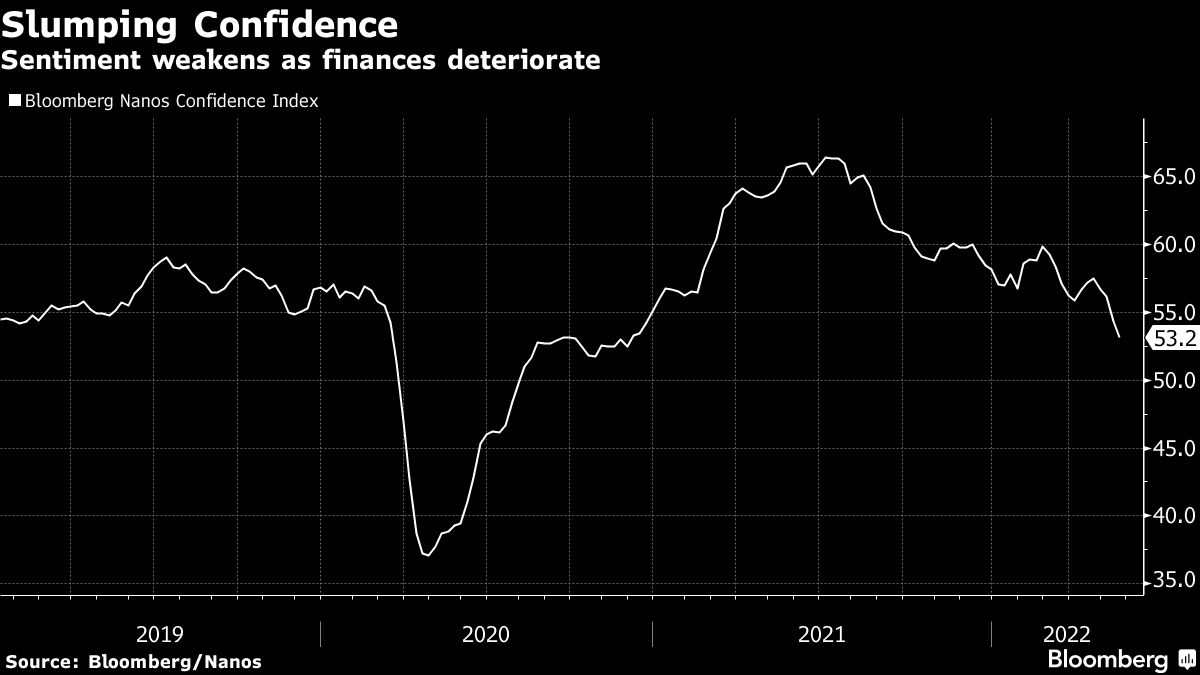 The Bloomberg Nanos Canadian Confidence Index, a measure of sentiment based on the complied polling data, dropped to 53.2 last week, the lowest reading since November 2020.

About 54 per cent of Canadians expect home prices to continue increasing, down from 55 per cent the previous week and as high as 64 per cent last month. Even with the decline, however, housing price expectations still remain above historical averages.

Canadians’ outlook for the economy is souring, though. Only 18 per cent of respondents said they expect the economy to strengthen over the next six months, while 52 per cent see it weakening.