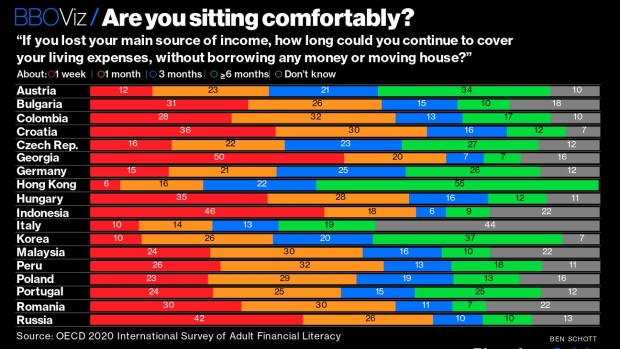 (Bloomberg Opinion) -- As the world reels from the fiscal shockwaves of Covid-19, a new 26-country survey suggests that many people are perilously unprepared for a major economic jolt.

According to the Organization for Economic Cooperation and Development’s 2020 International Survey of Adult Financial Literacy, 42% of the 125,787 adults polled reported worrying about meeting everyday expenses; 40% were concerned about their financial situation; and 37% reported they were just getting by.

Most concerning, given the threat of mass long-term unemployment, in response to the question, “If you lost your main source of income, how long could you continue to cover your living expenses, without borrowing any money or moving house?” 28% said about a week; 25% said about a month; 15% said about three months; and 18% said more than six months. The remainder, just over 14%, reported not knowing — which the study’s authors suggest is “revealing of either unpreparedness to consider such eventuality or lack of resources for a financial cushion.” And the financial precariousness in this increasingly unstable world is far from evenly distributed.

Although the OECD survey did not include the U.S., a recent National Public Radio report indicates that many Americans are in the same boat: At least half of all households in the four largest U.S. cities — Chicago (50%), New York (53%), Los Angeles (56%) and Houston (63%) — reported facing serious financial problems, including depleted savings, trouble paying bills and affording medical care.