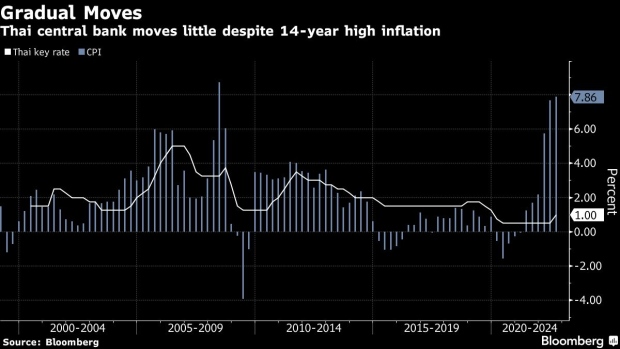 Sethaput Suthiwart-Narueput, governor of the Bank of Thailand, during a Bloomberg Television interview on the opening day of the World Economic Forum (WEF) in Davos, Switzerland, on Monday, May 23, 2022. The annual Davos gathering of political leaders, top executives and celebrities runs from May 22 to 26. , Bloomberg

(Bloomberg) -- The need for financial stability, one of the three main objective of the Bank of Thailand, is keeping monetary policy makers in the Southeast Asian nation from raising interest rates too fast.

While trends in economic growth and inflation may support the case for a faster monetary policy normalization, doing so would unhinge financial stability, BOT Deputy Governor Mathee Supapongse said on Saturday, during an annual interaction with the media at a mountain resort 184 kilometers (114 miles) outside Bangkok.

“We can’t raise rates hard and fast as we need to balance the three objectives,” he said, adding that the central bank needs to think about those indebted sensitive groups who will suffer from higher rates.

More so, the Thai economy is stil not back to pre-Covid levels and inflation will likely ease going forward, Mathee said.

That explains why the Thai central bank stuck to its gradual and measured approach to fighting Southeast Asia’s fastest inflation, with a quarter-point rate increase in September, despite peers Philippines and Indonesia tightening aggressively. Even neighbor Vietnam has resorted to a 100 basis-points increment after the US Federal Reserve’s hawkish rhetoric on curbing price gains.

“The Thai Policy response is different from other countries as we want to ensure a smooth take-off,” BOT Governor Sethaput Suthiwartnarueput said at the same meeting, as he reiterated a message to drive home the point that Thai inflation wasn’t demand-driven like that in the US.

Sethaput also flagged the need to bring down Thailand’s household debt levels to below 80% of gross domestic product-level prescribed by the Bank for International Settlements from the current close to 90%.

The central bank earlier retained the economy’s annual growth outlook for this year at 3.3%, which will be the slowest pace in the region. Growth next year is expected to improve slightly to 3.8%, although lower than the 4.2% forecast previously. The central bank sees headline inflation to average 6.3% this year, and fall back within target to 2.6% next year.

Here are some more points from the annual meeting:

(Corrects name of Bank for International Settlements in the seventh paragraph in article published on Oct.1)