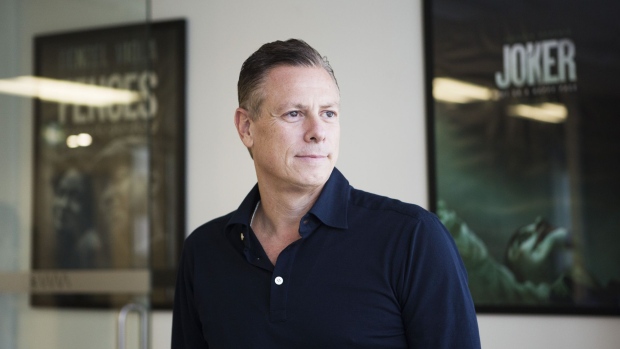 Jason Cloth in his Toronto office on Sept. 7. , Della Rollins/Bloomberg

Jason Cloth manages risk in his film-financing business just like he did as an investment banker, scrutinizing deals with one big question in mind: “How do I not get screwed?”

That means staying focused on business and not getting bedazzled by the glitz and glamor of Hollywood.

“People play on the vanity of it,” Cloth, 53, said in an interview at Bloomberg’s Toronto office. “But if you strip away the vanity, bright lights and you run it as an asset-backed lending play, then you just dig into the value and understand it.”

The approach appears to be working. The founder and chief executive officer of Toronto-based Creative Wealth Media has poured more than US$750 million into backing films over a decade. That’s made him one of the biggest private financiers in the industry and generated returns of eight per cent to 11 per cent for investors of the firm’s debt fund, according to Cloth.

What may be Creative Wealth’s biggest money maker is about to be released: “Joker” (starring Joaquin Phoenix) which is being shown at the Toronto International Film Festival Monday after premiering to critical acclaim in Venice, where it won the top prize Saturday.

The movie could draw as much as US$263 million in the U.S. and Canada after its opening in theaters Oct. 4, according to an estimate from Exhibitor Relations Co. With a budget well below typical superhero films, “Joker” could turn a tidy profit for Creative Wealth, which helped provide US$25 million of the film’s US$55 million in production costs.

Backing a winner is no easy feat in a field that famously devours money and relies on often-capricious audiences. “The Birth of a Nation,” which Creative Wealth backed, generated a lot of Oscar buzz in 2016 but flopped at the box office. Recent bombs include “Dark Phoenix,” a superhero film that prompted a huge write-off at Walt Disney Co., and “The Kitchen,” a Melissa McCarthy action movie that Cloth also backed, but took in just US$14.7 million worldwide.

To manage risk, Cloth’s strategy is to lend to multiple projects, secure the backing of top studios, and surround himself with trusted people -- including a team of ex-investment bankers. His clients include Canadian pension funds, high net-worth family offices and individuals.

“We focus on being an alternative debt shop,” Cloth said. “We’re an asset-backed lender, we just happen to take intellectual property as the asset, the collateral for our loans. Within every pension, there is a small allocation for alternatives and trust me, we are as alternative as you’re going to get.”

The Toronto native started his career as a fixed-income economist at Canadian Imperial Bank of Commerce, but left to start an alternative investment company focused on high-yielding assets not correlated to markets. It was there he was approached by two men to loan C$20 million ($15 million) to launch a new Canadian artist. “After I stopped laughing,” he said, he decided to invest a more modest sum in the artist known as The Weeknd.

It was Cloth’s only deal in the music industry, but it helped introduce him to people in film and television, a sphere to which he’d always been drawn, and led to the start of Creative Wealth. One of the first films he backed was indie flick “Tumbledown” with Bron Studios, who he’s now closely partnered with.

“We came to an understanding: I can bring you all the capital you need to grow, but when things go off kilter, which they do in the film world, I need the studio to stand behind me,” Cloth said.

In an environment of shrinking bond yields, Cloth said he’s got investors knocking on the door. The financier is aiming to boost his debt fund to $750 million by the first quarter of next year, including an additional debt raise with Canaccord Genuity Corp. for $200 million. He said he’s also in talks with other big studios for an additional equity fund.

Partnering with Bron has helped Creative Wealth win financing rights to several big hits, including “Joker,” the Batman-less tale cowritten by director Todd Phillips about how a failed comedian got so twisted.

Creative Wealth won a share of the project partly in exchange for a commitment to bring Warner Bros. ideas from Bron Studios in the future, Cloth said. “They need to distribute other things that are not their tent poles. They’re relying on companies like Bron to bring them top-end intellectual property.”

Getting backing by well-established Hollywood powerhouses is key to surviving as streaming grows, Cloth said.

“The streamers are a real problem for the indie film space: if you’re not some sort of event, people would rather stay at home and watch it on their personal screen,” Cloth said. “If you don’t have that huge marketing push of a major marketing studio behind you, boy oh boy it’s a tough slug.”

So far this year, the top-five grossing films account for 33 per cent of the box office ticket sales. In 2015, that sort of box office concentration was less than 25 per cent.

The business can always throw up a surprise. Cloth was proud to back “The Birth of a Nation.” Then decades-old rape allegations against its director and lead actor, Nate Parker, resurfaced. Parker had been acquitted at trial. It drew only about US$7 million at its opening weekend.

“It’s still one of my most proudest films, but it’s also a cautionary tale,” Cloth said. “You’ve got to dig into your filmmakers and stars and you have to have the fortitude to say if there’s smoke, you might want to stay away. Film is risky as it is.”

--With assistance from Christopher Palmeri and Anousha Sakoui.