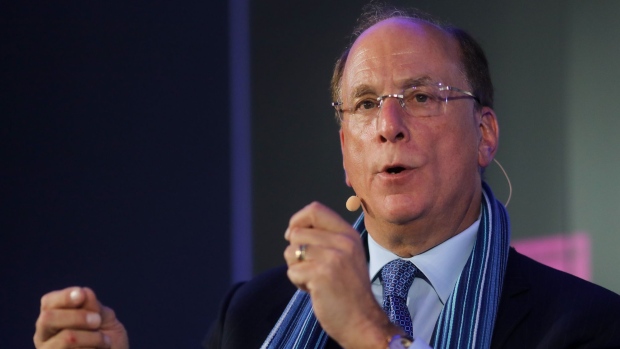 Larry Fink, chief executive officer of BlackRock Inc., gestures as he speaks during a Bloomberg event on the opening day of the World Economic Forum (WEF) in Davos, Switzerland, on Tuesday, Jan. 21, 2020. World leaders, influential executives, bankers and policy makers attend the 50th annual meeting of the World Economic Forum in Davos from Jan. 21 - 24. , Photographer: Bloomberg/Bloomberg

BlackRock Inc. Chief Executive Officer Larry Fink escalated his call for corporate leaders to focus on the environment in the wake of the COVID-19 crisis, and pledged new measures to address climate change.

Companies should disclose plans for how their business models will be compatible with a net-zero economy by 2050, Fink said in his annual letter to CEOs Tuesday. Drawing parallels between the deadly consequences of the pandemic and the effects of global warming, Fink wrote that positioning for the long term means preparing for the realities of climate change.

“The pandemic has presented such an existential crisis -- such a stark reminder of our fragility -- that it has driven us to confront the global threat of climate change more forcefully and to consider how, like the pandemic, it will alter our lives,” Fink wrote in the letter.

A year ago, Fink stirred Wall Street when he told companies to address climate change, which he said would bring about a “fundamental reshaping of finance.” Investor activists have since criticized the firm’s voting record on climate-related shareholder proposals, advocating for BlackRock to do even more with its boardroom power.

Fink unveiled additional measures Tuesday, including adding a “heightened-scrutiny model” in its active portfolios managing securities with climate risk. For companies not sufficiently focused on the net-zero transition, BlackRock will consider voting against management and potentially sell shares from its active portfolios.

Environmental advocates stressed that BlackRock must follow its messaging up with action, because disclosure alone won’t be enough to combat global warming.

“It’s not enough for BlackRock to just ask companies for a plan,” said Ben Cushing, a senior campaign representative for the Sierra Club’s Financial Advocacy campaign. “BlackRock should be actually holding companies accountable to reducing their climate impact and their emissions.”

BlackRock occupies a unique role in corporate America’s response to climate change as the world’s largest asset manager. The New York-based firm oversees US$8.7 trillion, including about US$200 billion in sustainable strategies. About two-thirds of the firm’s assets under management are invested in index-tracking funds, some of which track broad markets and contain large exposure to carbon-intensive businesses as a result.

As the firm grows, Fink, 68, has become an elder statesman of finance, penning his annual letters to business leaders and speaking out on sustainability issues. He pledged to lead by example last year, making changes to BlackRock’s own practices, including exiting thermal-coal producers in its actively managed portfolios and offering more environmentally friendly investment products.

A group of nonprofits, including Sunrise Project and Friends of the Earth, joined forces in 2018 to create “BlackRock’s Big Problem,” a campaign aimed at pressuring the money manager to push the companies it owns to align their business practices with a low-carbon world.

BlackRock’s latest initiatives still don’t “rise to the visionary leadership we need from the world’s largest investor in coal, oil and gas, and deforestation-linked commodities,” said Guarav Madan, a campaigner at Friends of the Earth.

The broader environmental overhaul that nonprofits endorse poses difficulties for BlackRock because of its extensive holdings through index funds. These investments are tied to what are essentially lists of companies representing an industry, a theme or a broad market. Such passive investing strategies contrast with active ones, where portfolio managers select individual investments.

Index-based investing is undergoing changes of its own. Custom strategies are on the rise in the industry, allowing investors to tweak indexes based on personal preference, including for ethical or environmental reasons.

BlackRock agreed in November to acquire personalized index provider Aperio for about US$1 billion. Fink said clients can use customized indexing to express preferences around net-zero goals.

BlackRock owns an average stake of about 7.5 per cent in S&P 500 companies, according to data compiled by Bloomberg.

Since President Joe Biden’s inauguration last week, the new administration has been taking steps on climate, including re-entering the U.S. into the Paris climate accord and halting oil leasing in the Arctic National Wildlife Refuge.