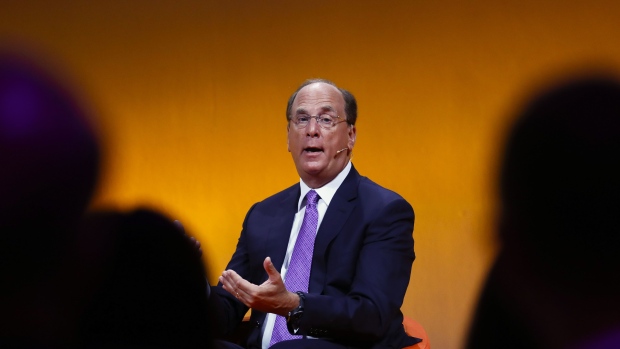 Larry Fink, chief executive officer of BlackRock Inc., speaks at the Handelsblatt Banking Summit in Frankfurt, Germany, on Wednesday, Sept. 4, 2019. Deutsche Bank AG Chief Executive Officer Christian Sewing said that the bank’s most radical revamp in years is set to deliver higher returns for investors, even as it grapples with the prospect of lower interest rates and a slumping German economy. , Bloomberg

Lieutenant Governor Dan Patrick issued a letter of his own Wednesday, urging the state comptroller to add the world’s largest asset manager to its list of financial companies that have cut ties with the state’s oil and gas industry. Patrick cited a new Texas law that restricts the state from doing business with firms that refuse to work with energy companies.

“If Wall Street turns their back on Texas and our thriving oil and gas industry, then Texas will not do business with Wall Street,” Patrick wrote.

Fink, 69, didn’t say in his letter that New York-based BlackRock would no longer work with energy companies. Instead, he sought to strike a balance between the firm’s environmental goals of eventually achieving a decarbonized future and its obligation to investors, as BlackRock is a top shareholder of most of the largest companies, including oil-and-gas producers.

BlackRock, which oversees more than $10 trillion, disputed the assertions in Patrick’s letter.

The firm “does not boycott energy companies,” New York-based BlackRock said in an emailed statement. “We do not pursue divestment from oil and gas companies as a policy. We will continue to invest in these companies and work with them to maximize long-term value for our clients. Our primary concern with the law is the potential negative consequences it could have on current and future Texas pensioners.”

BlackRock is facing blowback from other energy-producing states. On Monday, West Virginia Treasurer Riley Moore said he would order that the asset manager no longer be used as part of the state’s banking transactions.