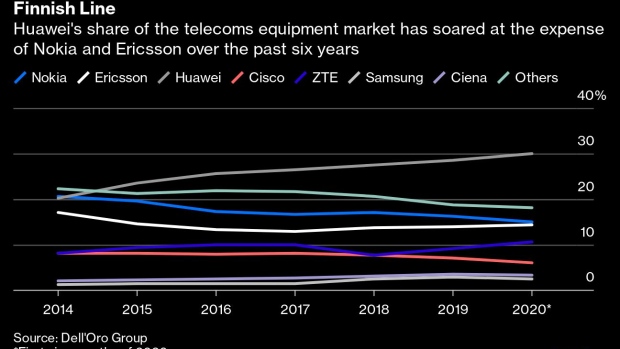 (Bloomberg Opinion) -- Pekka Lundmark has a lot resting on his shoulders. As chief executive officer of Nokia Oyj, he’s tasked with turning around the stuttering telecoms giant’s fortunes before it misses out on the 5G revolution. Also riding on his success, however, is the ability of the world’s industrialized economies to compete with China.

Beijing was quick to make 5G networks a strategic priority. Whereas 4G was all about enabling Instagram, YouTube, Uber and other content to run on people’s smartphones, 5G’s applications are broader: It will underpin smart factories, cities and offices. The technology is therefore a pillar of China’s economic plan. It expects to have installed 650,000 5G base stations nationwide by the end of this year — more than 10 times as many as the U.S.

The push has made Huawei Technologies Co. Ltd. the world’s biggest maker of telecoms equipment. But its close ties to the Chinese state have prompted a backlash. The company had access to as much as $75 billion in state support over two decades, the Wall Street Journal reported last year. Under pressure from the U.S., governments from Stockholm to Singapore have imposed restrictions on the use of gear made by Huawei, citing security concerns.

This is where Nokia comes in. Surging investment in 5G networks should be benefiting the Finnish firm as well as Swedish competitor Ericsson AB. With Huawei, the three control about 60% of the $90 billion telecoms equipment market.

Yet even as it becomes harder for Huawei to access major markets like Japan, the U.K., France and India, Nokia is losing both market share and revenue. The reason is clear: Under Lundmark’s predecessor, Rajeev Suri, the company dropped the ball on 5G. Investments in the wrong technologies gave its two major competitors a head start.

That’s a problem not just for Nokia, but for nations that have cut out Huawei. Mobile carriers prefer to have at least two suppliers for their wireless networks, meaning Ericsson’s equipment alone won’t suffice for fitting out 5G. They need Nokia to get its act together if they’re going to enjoy all the benefits promised by the new technology.

Many of the company’s problems stem from the 11 billion-euro ($13.4 billion) acquisition of Alcatel-Lucent SAS, the parent company of the famed Bell Labs, in 2015. The takeover increased Nokia’s scale and product range, which should have made it easier to compete with the insurgent Huawei. But the combination also created an unwieldy behemoth of 98,000 employees rife with underperforming units.

The acquisition also led Nokia to bet on the wrong tools for 5G. It chose a semiconductor technology for its base stations(2) that allowed for more flexibility and customization. In theory, that was good news for its customers and engineers. Plus it made integrating Nokia and Alcatel-Lucent’s different tech easier. But it was also a lot more expensive to manufacture, which ate into profitability and made it harder to match the competition on price for 5G kit(1).

Since taking the reins in August, Lundmark seems to have made the right moves. Whether or not these right the ship in 2021 will be crucial.

He plans to dedicate an additional several hundred million euros in research and development spending next year to catch up to rivals’ innovations. But because Nokia lost market share in the early phases of 5G deployment, it can’t spend as aggressively on R&D as its peers. Ericsson is expected to generate more than twice as much free cash flow as Nokia this year. Meanwhile, the latter’s push into R&D will all but eliminate profit at its mobile networks division.

Lundmark has also trimmed the size of the management board and pledged to be more clinical about shedding unprofitable divisions. He’s moving 14,000 employees out of central functions and into the operating units.

The good news for Nokia is that it’s not too late. As the Huawei bans start to take effect in 2021 — the U.K. brought forward its restrictions to September — Nokia will have the chance to steal business, particularly in Europe, where 5G rollouts have lagged behind the rest of the world. But those countries imposing bans need Nokia to be ready.

There’s no shortage of interest. Global spending on 5G networks will jump about 30% to more than $20 billion next year, according to the consultancy Dell’Oro Group. IHS Markit estimates that 5G will make $13.2 trillion in global economic value possible by 2035. Given the study was commissioned by Qualcomm Inc., a chipmaker supplying much of the underlying technology, it’s worth taking that number with a pinch of salt. But even if the real figure is just a fraction of that, the economic benefits will still be meaningful.

Lundmark knows that getting 5G right is crucial for Nokia’s future. He should know too that the ability of Europe and the U.S. to ride the next wave of innovation is also at stake.

(1) Nokia has since pivoted to chipsets that are technologically similar to those used by Huawei. At least 35% of the base stations it ships this year will include the new tech, and it's investing in R&D to update the remaining proportion, which require further customization.

(2) Nokia's share of the 5G mobile infrastructuremarket is between 10% and 15%, according to the Dell'Oro Group. Ericsson has between 20% and 25%, while Huawei has between 35% and 40%. Chinese upstart ZTE has 15% to 20%, benefiting from early spending in its home market.