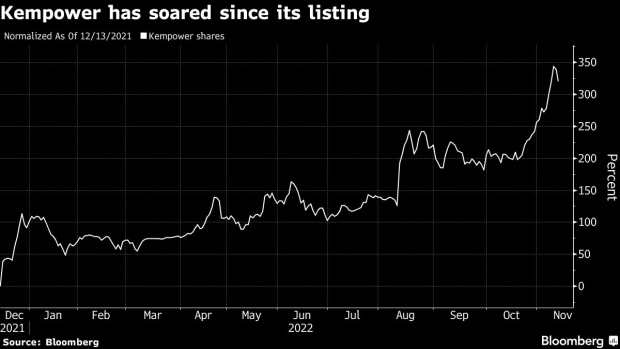 (Bloomberg) -- A Finnish maker of high-speed chargers is accelerating its entry to the US market following President Joe Biden’s $7.5 billion pledge to tackle a sparse network of power sources for electric vehicles that is hampering the switch from fossil-based transport.

Kempower Oyj has started hiring a sales team with the intention of kicking off sales in the US by the end of 2023, two years ahead of its original plan, to ensure it gets a piece of the lucrative pie, Chief Executive Officer Tomi Ristimaki said in an interview.

“You have to be in the game now when the market shares are being allocated within this program,” he said. “We have a recruitment plan ready for the US-market entry and the first wave of the recruitments has just started.”

Kempower makes fast EV chargers, which allow multiple vehicles to plug into a single system, unlike many of its rivals with a one-unit-per-car model. That’s particularly handy when placing them near other services, such as restaurants and shopping malls, according to the five-year-old company with roots in the small southern Finnish town of Lahti.

Kempower is now worth €1.3 billion ($1.3 billion) after its shares soared by more than 300% following an initial public offering less than a year ago.

The Biden administration’s charger plan was a game changer for Kempower in the decision to target the US as it would normally only enter markets with EVs already sold in large quantities.

In the US, electric vehicles are yet to take off in the absence of the charging infrastructure, largely due to long distances combined with the ubiquity of car transport. Elsewhere, people are more likely to buy the cars first, even before extensive charging networks are built, with Norway and the Netherlands presenting as key examples, the CEO said.

However, the US administration’s plan to ensure half a million chargers are placed across the country by 2030 could be a turning point for the market that has been slow to evolve compared to Europe.

Grants from the $5 billion National Electric Vehicle Infrastructure program could be a trigger in the long run to make the EV market in the US “even bigger than Europe,” which is currently growing faster, according to Ristimaki, who added that “I don’t normally like subsidy markets much but this one is so big that it actually pushes charger infrastructure forward.”

Kempower is focusing on the east coast to identify a state with a top-notch environmental, social and governance offering, the CEO said.

It still has various entry options, such as whether it makes sense to set up its own production, use partnerships or make an acquisition. Part of the calculus are so-called Buy America rules, which require funds to be spent on US-made products and materials in order to bolster domestic industry and labor, even as there’s talk of easing those requirements to speed up the roll out.

“We are looking at the market now and what would be the fastest way to enter it,” Ristimaki said.