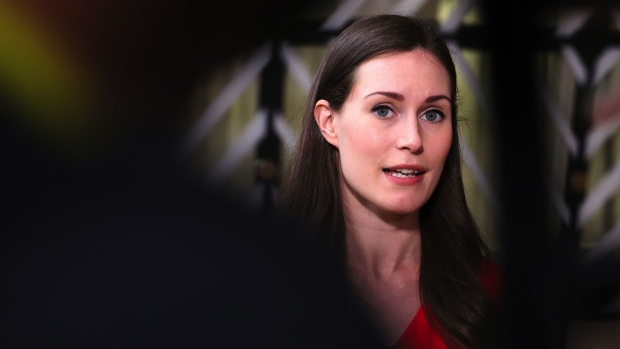 Sanna Marin, Finland's prime minister, speaks to journalists as she arrives at a European Union (EU) leaders meeting in Brussels, Belgium, on Thursday, June 24, 2021. German Chancellor Angela Merkel called on the European Union to coordinate rules for travelers from areas with outbreaks of Covid-19 variants as the risk of a renewed spike in infections remains. , Bloomberg

(Bloomberg) -- Finnish Prime Minister Sanna Marin has come under heavy media criticism after enjoying a night out on the town knowing she had been exposed to the coronavirus.

Marin, 36, is being called out for a lapse of judgment after she failed to return home from the bar on Saturday night upon learning Foreign Minister Pekka Haavisto had tested positive for Covid. The two had been in close proximity just a day earlier.

Marin, who is fully vaccinated, said she had not received instructions to isolate, prompting critics to counter that such instructions shouldn’t have to be given to a person in charge of efforts to combat the virus. While fully vaccinated individuals can still transmit the virus, Finnish authorities do not routinely quarantine them.

Marin has since tested negative twice.