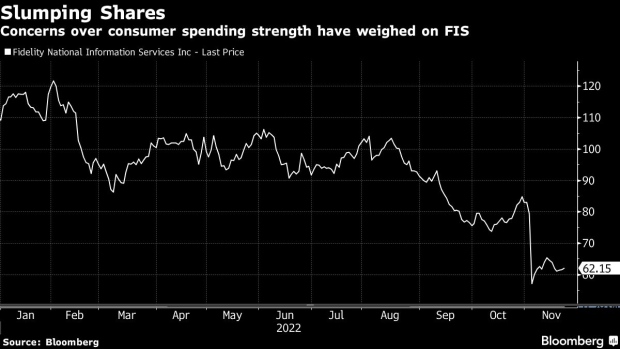 The cuts are expected to be gradual and may affect several thousand staffers and contractors at the payments company, according to people familiar with the matter. They’re part of Ferris’s plan to deliver at least $500 million in cost savings in coming quarters.

Ferris, the company’s current president, is set to take the reins from longtime CEO Gary Norcross on Jan. 1. The company had more than 65,000 employees at the end of last year.

“We are focused on permanently reshaping our cost structure through both cost-reduction and containment initiatives,” Ferris told investors earlier this month. “These include actions surrounding the optimization and reduction of vendor spend, the outsourcing of non-value-added activities, and reviewing and rightsizing the current workforce.”

A spokesman for the Jacksonville, Florida-based company declined to comment on the job cuts. Shares in FIS rose more than 4% on Tuesday and traded at $63.83 at 11:36 a.m. in New York.

FIS has long been known for providing banking and capital-markets technology for thousands of financial institutions. In 2019, the company completed its roughly $42 billion cash-and-stock acquisition of the payments giant Worldpay Inc., giving it a massive foothold in the business known as merchant acquiring, which involves enticing businesses around the world to agree to accept electronic payments.

That unit has faced headwinds in recent months, especially the portion of the business focused on sellers in the UK, according to Ferris.

“The economic conditions in the UK are pretty challenging,” she said early in November. “And as we look out even over the next 60 days, it’s tough to call it. They are in a recession, their consumers are struggling and we are tied to consumer spend.”

FIS shares have plummeted this year partly on concerns about the strength of consumer spending. The stock drop has erased almost $30 billion from the company’s market capitalization.

The merchant business has long been focused on winning share in physical stores, though Ferris said this month the company is focused on improving its e-commerce business as part of her turnaround efforts.

Still, executives lowered their outlook for both revenue and earnings for the year. Adjusted profit per share is now expected to be as much as $6.66 in 2022, compared with the $7.10 the company had previously forecast.

“What you will never see us do is make cuts such that we will impair the ability for the business to grow or it will impact our customers,” Ferris said. “So, I would say that enterprise transformation program is just that. It’s enterprise-wide. And we will be focusing on everything across our entire global portfolio.”