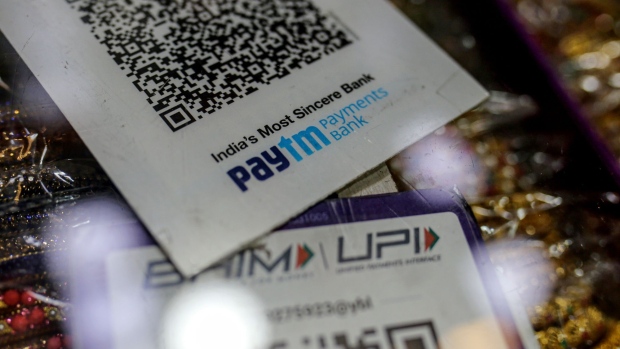 A bangle store advertises the use of the Paytm digital payment system in Mumbai, India, on Saturday, July 17, 2021. Paytm, the Indian digital payments pioneer backed by SoftBank Group Corp., is seeking approval for a $2.2 billion initial public offering that could be India's largest. , Bloomberg

Paytm is grappling with intensifying competition from Amazon.com Inc., Meta Platforms Inc. and Alphabet Inc. as well as a slowdown in transactions during the pandemic. The company, which counts Warren Buffett’s Berkshire Hathaway Inc. and SoftBank Group Corp. among its backers, pulled off India’s largest-ever initial public offering at the time in November, a landmark moment for the country’s young internet industry.

But its shares plunged 27% on debut and have dropped more than 70% since the $2.5 billion IPSO. Investors have grown cautious about its longer-term growth prospects and potential regulatory tangles. In March, India’s central bank barred the company’s lending venture from accepting new customers, citing concerns it may have shared local users’ data abroad, including with Chinese-based entities.

Read more: Buffett-Backed Paytm Aims to Break Even in Under Two Years

Vijay Shekhar Sharma, from the small central Indian town of Aligarh, founded One97 about two decades ago and won acclaim nationwide as a small-town-boy-made-big. But analysts including those at Macquarie Capital Securities (India) Pvt. have questioned his ability to turn Paytm  into a profitable business any time soon.

India’s consumer Internet stocks have taken a beating, mirroring the worldwide tech stock slide, but the stock of the high-profile Paytm continues to hover around about a fourth of its offer price.

The stock swoon has proven painful for early backers of Paytm, as its market cap has dropped. Berkshire Hathaway Inc. invested in One97 when the company was valued at more than $10 billion in 2018, and T. Rowe Price Group Inc. invested at a $16 billion valuation the following year, Bloomberg News has reported.

In a letter to shareholders last month, founder Sharma said the company was targeting operational break-even by September next year. Paytm in April predicted it will become profitable in six quarters on an operating earnings before interest, tax, depreciation and amortization basis. That forecast followed a doubling of its gross merchandise value to 2.59 trillion rupees in the three months ended March.

Paytm disbursed over 15 million loans worth 76.23 billion rupees in the year ended March, the company said in its earnings release. Its merchant base grew to 26.7 million, it said.

In a separate statement, Paytm said it plans to set up a general insurance company and intends to apply for a new license. It will hold 74% in the new company, which will be set up with an investment of as much as 9.5 billion rupees over 10 years, it said.