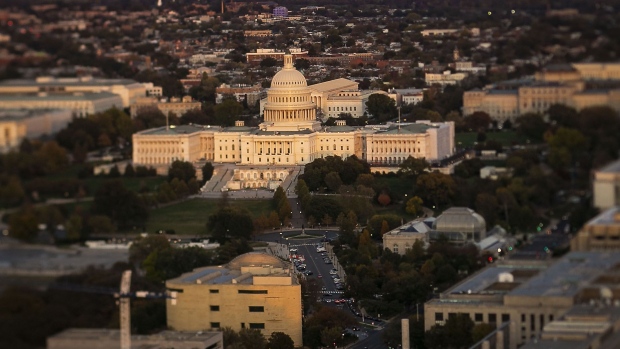 (EDITORS NOTE: Image was created using a variable planed lens.) The U.S. Capitol is seen in this aerial photograph taken with a tilt-shift lens above Washington, D.C., U.S., on Tuesday, Nov. 4, 2019. Democrats and Republicans are at odds over whether to provide new funding for Trump's signature border wall, as well as the duration of a stopgap measure. Some lawmakers proposed delaying spending decisions by a few weeks, while others advocated for a funding bill to last though February or March. Photographer: Al Drago/Bloomberg , Bloomberg

In its report, the House of Representatives’ Select Subcommittee on the Coronavirus Crisis recommended that Congress and the Small Business Administration should consider carefully whether “unregulated businesses” such as fintechs should be allowed to participate in future federal lending programs. The SBA was responsible for administering PPP funds.

“While the PPP delivered vital relief to millions of eligible small businesses, at least tens of billions of dollars in PPP funds were likely disbursed to ineligible or fraudulent applicants, often with the involvement of fintechs, causing tremendous harm to taxpayers,” lawmakers wrote in the report issued Thursday.

The subcommittee looked into the roles of the online financial firms in helping to distribute the $5 trillion in pandemic-related stimulus funds. The report highlighted issues at four companies in particular: Kabbage, Womply, Blueacorn and Bluevine.

Combined, Womply and Blueacorn worked on nearly one in every three PPP loans funded in 2021, the committee found. Both companies “failed to implement systems capable of consistently detecting and preventing fraudulent and otherwise ineligible PPP applications,” according to the report. Representatives for both firms didn’t immediately respond to requests for comment.

Kabbage, a small-business lender, failed to identify “clear signs of fraud,” including PPP loans given to fake farms, the lawmakers wrote. Its employees expressed reservations regarding the fraud-detection system the company had in place.

Much of Kabbage was acquired by American Express Co. in 2020, with PPP and small-business loans left in the company’s portfolio handled by a related entity known as KServicing that filed for bankruptcy in October.

“Unfortunately, the report does the American people a disservice by parsing bits of information out of context to reach a predetermined conclusion,” KServicing said in a statement. “Looking back on the tumultuous time of the height of the Covid-19 pandemic, the fintech community played a vital role in helping bolster the US small-business community and we are proud to have been part of that endeavor.”

“We are proud to have participated in the PPP program during a time that was truly extraordinary,” Bluevine said in a statement. “As the subcommittee noted, all fintech companies are not the same, and Bluevine adapted to the ongoing threats better than some of the other fintech companies examined in the inquiry.”

“The report clearly exemplifies the importance of responsible bank-fintech partnerships in upholding the strongest protections for businesses and consumers, and demonstrates that innovative banks like Cross River partnering with responsible fintech companies during PPP provided fraud protections and controls,” a spokesperson for Cross River said in a statement.

The bank also emphasized that the partnerships helped ensure aid went to small businesses unable to borrow from larger lenders that were focused on serving existing customers.

Celtic said it is continuing to cooperate with prosecutions and investigations of PPP fraud.

“Celtic made extensive and effective efforts to combat fraud, while at the same time adhering to Congress’s and SBA’s direction to get money out to companies quickly, in a time of national emergency,” the company said in a statement.