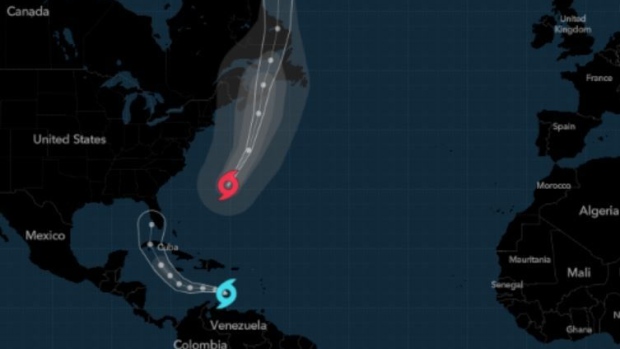 (Bloomberg) -- After lashing Bermuda, Hurricane Fiona is racing north toward Eastern Canada, threatening to become the most powerful storm ever to hit the region. A second system, meanwhile, is developing in the Caribbean and may strike Cuba and Florida early next week as a hurricane.

Fiona’s winds dropped slightly to 125 miles (200 kilometers) per hour, down from 130 mph earlier, making it a Category 3 major hurricane on the five-step Saffir-Simpson scale, the US National Hurricane Center said in a 5 p.m. advisory.  Though the storm may not meet the technical definition of a hurricane, it should still have the power of a Category 2 storm, and in terms of central pressure -- an inverse measure of strength -- it would tie as the lowest recorded in Canada.

“This could be the worst storm they have ever seen,” said Don Keeney, a meteorologist at commercial-forecaster Maxar.

The system in the Caribbean, currently a tropical depression, is forecast to grow into a hurricane by early Monday, barrel over Western Cuba on Tuesday and strike Florida’s West Coast the next day as a powerful Category 3 storm.

Florida Governor Ron DeSantis declared a state of emergency in 24 southern counties, put the National Guard on standby and told residents to prepare for the worst. A hurricane watch has been issued for the Cayman Islands and tropical storm watch for Jamaica.

The two storms are a forceful sign that the Atlantic Hurricane season is roaring to life after months of quiet. Forecasters had predicted an unusually active year. Yet for the first time in 25 years, the Atlantic didn’t churn up a single tropical storm during August. Now September has given rise to three hurricanes, with a fourth threating to form.

Fiona has already cut a swath of destruction across the Caribbean, leaving floods, landslides and power outages on the Dominican Republic and Puerto Rico. Hurricane warnings have been posted for parts of Nova Scotia, Prince Edward Island, and Newfoundland. It is possible Fiona will lose some of its tropical characteristics, but it will retain its power regardless of how it is defined.

Fiona could cause between $1 billion to $1.5 billion in damage in Canada, based on its current forecast, said Chuck Watson, a disaster modeler with Enki Research.

In addition to its pent up power, Fiona is a large storm with hurricane-strength winds reaching out 115 miles, about the distance from New York City to Hartford, and tropical-storm strength stretching out 345 miles, the hurricane center said. As a result, Nova Scotia should feel the impacts in a few hours.

The storm in the Caribbean is on track to pass just west of Havana and strike Florida near Fort Myers. There is a chance the track will change, potentially shifting further west into the Gulf of Mexico. The storm’s current forecast keeps it away from offshore oil and natural gas production in the western Gulf.

The storm could cause about $12 billion in losses in western Florida and Cuba, Watson said. The damage could be particularly harsh for citrus growers, who are just about to start harvesting their crops.

“If it does hit, this is the worst time of year for that to happen,” Keeney said.

Florida is the largest orange juice producer in the US. Orange juice futures were up 1.2% in New York Friday, bucking a broad decline across commodities.

Forecasters are also watching Tropical Storm Gaston, which is bring heavy rains and winds to the Azores through the weekend and Tropical Storm Hermine, which formed near the African coast and is expected to be short lived.