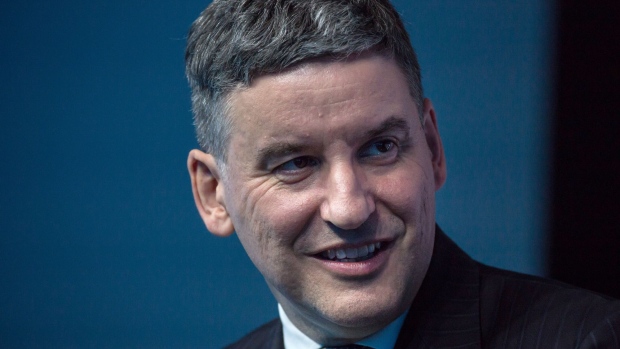 (Bloomberg) -- In an office not far from the Houses of Parliament, Antony Jenkins is plotting the future of global banking. His ambition is to serve one tenth of the world’s population — or one billion people — by providing the technology behind everything from checking savings to loans.

Jenkins’ business, 10x Banking Technology, is a player in London’s burgeoning fintech scene. It was valued at about £600 million ($756 million) at its most recent funding about a year ago, with Jenkins’ own stake worth £200 million. Among its backers are JPMorgan Chase & Co., Blackrock Inc. and Ping An Insurance Group Co.

Last year the firm raised £133 million from investors. The fresh funds helped cushion it against losses that roughly doubled to £43.7 million in 2021 and gave Jenkins the cash to expand when market turmoil is making fund-raisings for other fintechs tough.

In contrast to the 20 or 30-somethings seeking to make their mark in fintech, Jenkins is the 60-year-old former chief executive officer of Barclays Plc. After a turbulent three years when Jenkins received the nickname “Saint Antony” for his attempt to reform its culture, he was ignominiously ousted in 2015.

Jenkins, who grew up in Stoke-on Trent in the West Midlands, became the first in his family to go to college attending the University of Oxford before embarking on a banking career. The forced departure from Barclays was a “shock” that took some time to get over, but also a “liberation,” according to Jenkins. In the months after his sacking, Jenkins ruminated on the germ of an idea that had consumed him through the decades he spent first at Citigroup Inc. and then Barclays: why is the technology inside big banks so bad?

Jenkins, dressed in a black shirt, black jeans and black shoes –- a different look from that the one he sported as a member of Barclays’ top brass -- explains how he went from banking reject to fintech evangelist.

He was approached about other mainstream roles after Barclays, but instead began sketching a business plan on a flipchart in his dining room. “I’ve always had an entrepreneurial leaning,” he says.

Working with a small group of close associates, in 2016 Jenkins launched 10x with £1 million of his own money, initially to see if anyone would support his ideas about how banks could be made better. The company’s name stands for the belief that for financial firms to adopt a new technology it has to be 10 times better than what they already have.

Chinese insurance group Ping An — now in the news for its campaign to break up HSBC — was one of his first investors, the result of a 2017 meeting between Jenkins and Jonathan Larsen, another former Citigroup executive.

Months after their meeting, Larsen joined Ping An and was charged with creating a strategic corporate venture fund to look for opportunities in fintech and other areas. An investment in 10x became the Ping An fund’s first deal.

“I felt it was trying to tackle the problem head on,” Larsen, who is today a director of 10x, told Bloomberg News. “The company is poised for scaling. There are probably 3,000 banks out there that need to transform their technology.”

In the latest accounts, filed in May, Jenkins gave an idea of his ambitions: 10x can ultimately provide the technology that “reliably underpins the service of a billion banking customers.”

That is “a long-term aspirational goal,” says Jenkins, part of 10x’s ambition to be “the global bank operating system of choice.”

10x’s own progress hasn’t been plain sailing. The company’s first customer, Virgin Money UK Plc walked away from a project to replace its core systems when the work was almost complete after agreeing a takeover by another lender. Although the merger denied 10x the calling card of a major completed project, it provided much of the money to fund the continued development of the firm’s technology.

Dealing with creaking IT is one of finance’s most pressing tasks. Yet the work is expensive and can be very risky - in the UK a project to replace the core banking system of TSB Bank went so wrong it led to the departure of the CEO and an inquiry by British regulators.

Jenkins claims he can do the work for relatively little money, and at a lower risk than many in-house projects. In client meetings, his party piece is to bring out a laptop and, in front of the potential customer, replicate their product range in a matter of minutes by using the pre-built services that make up what 10x calls its SuperCore.

A bit like a set of Lego blocks, each piece of 10x’s code is a distinct part of a product. Slot them together and the firm’s client can quickly build products ranging from a variable rate mortgage to a savings account.

Another feature is a different transition technique. Rather than attempting to switch from one platform to another over a weekend - the traditional approach - 10x allows a client to run a parallel platform so business can be moved over gradually.

IT upgrades that have traditionally cost hundreds of millions, or billions, of dollars can now be done for low single-digit millions, and in a fraction of the time before, according to Jenkins.

Clients converted to 10x’s way so far include JPMorgan, which uses it for its start-up British online bank, Chase UK. The firm has also agreed a partnership with Australia’s Westpac Banking Corp.

Ping An is considering using 10x’s technology to boost the roll out of its own banking arm, Ping An Bank.  “I think there’s every chance that we’ll end up working with 10x, and to have the option to do so is one of the reasons we invested,” says Larsen.

Jenkins likes to compare the position of the big players today to incumbents in other industries that were overtaken and then destroyed by start-ups. From Eastman Kodak to Blockbuster Entertainment, he cites examples of corporate juggernauts that disappeared almost overnight.

In banking, 10x’s ability to set up a new bank in less than six months, perhaps even for free, could create similar carnage, Jenkins says. 10x’s drop in revenues in 2021 reflected a change in model - from being paid to develop systems for clients to one based on recurring revenues from subscribers to its platform, according to the business.

A copy of the Banksy painting of a Rhino with the words ‘I AM A UNICORN’ printed above it hangs in the 10x offices. While sky-high fintech valuations have minted several UK-based unicorns as investors hunt for the next big thing in finance, Jenkins says he is dubious about the methods some have used to hit those heights — even before the recent market turmoil hit valuations and fundraising.

“I’m a little skeptical about all this valuation vanity,” he says. “You can get almost any valuation you like if you give the investors preferential terms on a round.”

Bringing long-term change to banks may be a more meaningful foundation for a further boost to 10x’s value - and could give the last word to Jenkins after his Barclays ousting.