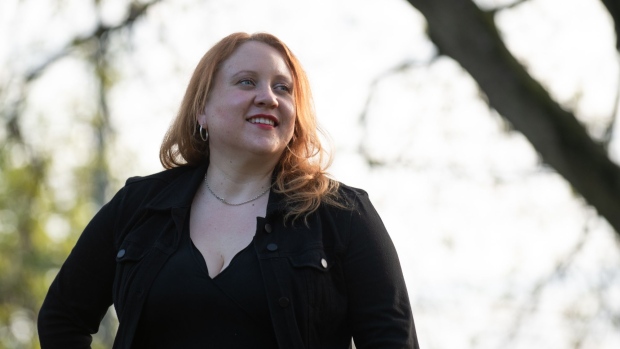 Margaret Mitchell, a former lead researcher at Google, in the Phinney Ridge neighborhood of Seattle, Washington, U.S., on Monday, April 19, 2021. The ouster of Mitchell followed years of friction over how Google handled allegations of harassment and bias. , Bloomberg

(Bloomberg) -- The former co-head of Google’s Ethical AI research group, Margaret Mitchell, who was fired in February after a controversy over a critical paper she co-authored, will join artificial intelligence startup Hugging Face to create tools that help companies make sure their algorithms are fair.

Hugging Face maintains a repository where people can share and collaborate on AI models, an open-source platform that’s used by more than 5,000 organizations, including Alphabet Inc.’s Google, Facebook Inc. and Microsoft Corp. Mitchell plans to start in October and will begin by working on a set of tools to ensure the datasets used to train AI algorithms aren’t biased. Incomplete data used to “teach” a model how to make predictions or determinations typically leads to AI software that performs poorly with whichever groups are left out of the original data, be it women, members of minority groups or older people.

Mitchell and Hugging Face already had a relationship because, in order to ensure models are fair, the company recommends engineers and scientists that post projects use a tool Mitchell developed at Google called Model Cards that evaluates an AI system to disclose strengths and weaknesses. About a quarter of the 20,000 projects posted on Hugging Face use Model Cards, said Clement Delangue, chief executive officer and co-founder of Hugging Face.

“There should be very serious and vigorous work” on software that evaluates AI systems, Mitchell said in an interview. “This is a really cool opportunity for me to help model builders better understand the harms and risks in the kind of models they are building.”

To read more about algorithms: What are algorithms and are they biased against me?

After her experience at Google, Mitchell said she was eager to work at a smaller company where AI ethics are being considered from the start, rather than as an afterthought. At Hugging Face “there was already a lot of basic ethical values in place,” she said. “It was clear I wouldn’t have to shoehorn in or retrofit something like ethical processes.”

Mitchell’s firing stemmed from turmoil in Google’s Ethical AI research team after the company last year dismissed the group’s other co-head, Timnit Gebru, after she refused to retract a paper co-authored with Mitchell and others that included criticism of Google technologies. Mitchell, the remaining head of the group, became a fierce public critic of Google and its management after Gebru’s exit, complaining both about the company’s failure to take seriously concerns about its AI products and about the treatment of Gebru, one of the few prominent Black women in AI research. Google has said that Gebru resigned and Mitchell violated its code of conduct and security policies.

Former colleagues expressed outrage over Google’s handling of the matter, and interviews earlier this year with more than a dozen current and former employees and AI academic researchers showed Google’s AI effort had been mired in disputes over the way Google has dealt with allegations of harassment, racism and sexism for more than two years.

Hugging Face offers some tools for free and charges a fee for others. It has more than 300 paying customers, including Intel Corp. and Qualcomm Inc. While Hugging Face has several other AI ethics experts on its 50-person staff, CEO Delangue plans to make all employees responsible for the effort.

“We want to not build a side AI ethics team, but really make it central to the company and make sure it’s really included in everyone’s job,” Delangue said. “Meg is not going build a team of a few people who are going to be consulted once in a while.”