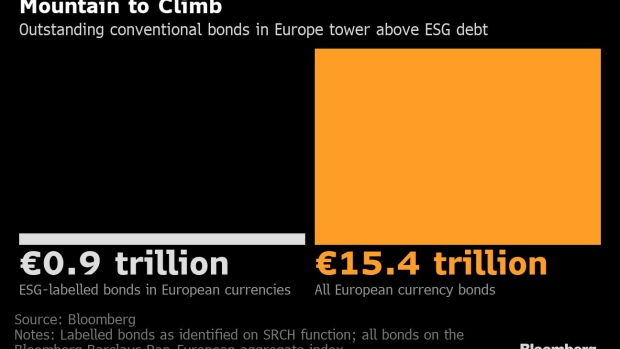 (Bloomberg) -- A new trend is emerging in the world of ESG as companies turn their attention to cleaning up old debt.

They’re either buying back conventional notes, which could finance just about anything, or transforming old securities to green. Italian utility company Enel SpA is leading the charge in buybacks with the largest one to date: about 1 billion euros ($1.19 billion). French real estate group Gecina SA in May transformed billions of existing notes to green bonds, the first deal of its kind.

It’s not much compared to the trillions of euros of outstanding so-called brown debt, but it’s another step toward Europe’s attempt to become the world’s first climate-neutral continent by 2050. So far, only a few companies have purged -- at least partly -- their finances of normal bonds. Still, the transition is gathering momentum.

“Most companies are moving into the direction of making their capital structures more sustainable,” said Daniel Ender, a credit analyst at Actiam NV, which oversees 57.2 billion euros. “Investors are looking more closely into sustainability in their investment decisions and corporates who show they are committed to changing their business model to be more sustainable and future proof are favored.”

That’s why ethical bonds are cheaper for companies to sell. Combined with historically low borrowing costs and a dearth of supply compared with the ever-growing demand for the debt means borrowers can get good deals when they commit to ESG.

“A sustainable company is more profitable and resilient in the long run so it deserves a lower cost of debt,” Alessandro Canta, Enel’s head of finance and insurance, said by telephone.

In addition to the buyback, Enel issued 3.5 billion euros of sustainability-linked bonds with an average coupon of about 0.5%, a fraction of the more than 3% on the debt it bought back.

“The interest-rate environment is still so positive that you can capture value if you accelerate,” said Canta. “This is why we did a liability management exercise.”

Pleasing the ethical investment crowd is an increasingly important task for companies. Four-fifths of investment decisions either always or often incorporate climate risk, according to a survey published by Aviva Investors in June. And assets under management at sustainable fixed-income funds have jumped almost 40% in the 12 months through March to $325 billion globally, according to data by Morningstar Inc.

By switching to a green debt structure, “we can attract more investors that haven’t seen us before on the market, since we are a small to mid-sized company,” said Christoph Rainer, head of investor relations at UBM Development AG, an Austrian real estate group.

The company issued its first sustainability-linked hybrid in June while buying back part of a hybrid sold in 2018, following up on a sustainable-linked issue and exchange offer in April. French real estate group Gecina took a different route, getting consent from investors to transform 5.6 billion euros of outstanding notes to green bonds. The group plans to reach net-zero carbon emissions.

“When you are single A rated, it’s easier to get access to liquidity than when you are triple B or double B. It’s exactly the same with sustainability,” said Nicolas Dutreuil, Gecina’s deputy chief executive officer in an interview.

Owing to the smorgasbord of voluntary rules governing the market for ethical debt, even if a company shifts toward ethical financing, the burden of identifying so-called greenwashing -- where the environmental benefit of an investment strategy is exaggerated or misrepresented -- is on investors.

They still have to “investigate, unpick and be able to discriminate between issuers on how structured and genuine their transition strategy is,” said My-Linh Ngo, head of ESG Investment at BlueBay Asset Management, which oversees $75.2 billion.

Also, the companies shifting toward environmental, social and governance financing are, for now, merely chipping away at the mountain of conventional debt that has accumulated over decades.

There are currently more than $18 trillion of bonds in the Bloomberg Barclays Pan-European index, with some issued as early as the early 1990s. By comparison, bonds with a green, social, sustainability or sustainability-linked label in European currencies still amount to just over $1 trillion.

This could change as policy makers promote the effort, with the European Union releasing a framework for sustainable investments and launching a $1 trillion stimulus program, NextGenerationEU, to make the continent greener.

“Larger issuers doing these type of exercises could lead to material increases in the volume of sustainable debt that is outstanding,” said Arthur Krebbers, head of sustainability, corporates at NatWest Markets Plc. “If you see for example a government, a development bank or a major automotive do a sustainable liability management exercise, then suddenly you can have multiple billions of incremental ESG-labeled debt outstanding.”