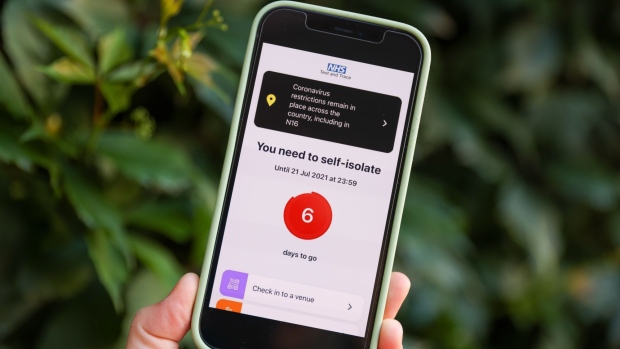 A "You need to self-isolate screen" on the NHS Covid-19 app on a smartphone arranged in London, U.K., on Friday, July 16, 2021. U.K. ministers are racing to change the rules on self-isolation after a surge in alerts from the country’s Covid-19 app takes people out of their workplaces and disrupts business. , Bloomberg

(Bloomberg) -- Businesses in the U.K. say there are signs the “pingdemic” of workers told to self-isolate after contact with a Covid-19 case is starting to ease as infection rates fall, while more staff may be deleting the tracing app.

Almost 690,000 people in England and Wales were alerted by the official Covid-19 mobile phone app and told to isolate in the week to July 21 -- a record high, according to the latest data released Thursday.

But the new numbers cover the period when cases hit a recent peak of 54,674 on July 17, and not the significant reduction since. Daily cases fell for seven days to Tuesday before rising again, reaching 31,117 on Thursday.

Some business leaders are now noticing a drop in the number of contact-tracing alerts among their employees. And while that is strongly linked to a period of lower infections, it’s also thought many workers are deleting the app or switching off its tracing function to avoid being “pinged.”

“The last couple of days, day on day, the pinging has started to drop,” Richard Walker, managing director of Iceland Foods Group, told the BBC on Wednesday. “It feels to me like potentially they’re starting to delete the app en masse, in numbers that they weren’t previously doing. And to be honest, who can blame them?”

Meanwhile the number of venue “check-ins” recorded by the Covid app fell to 6.7 million in the week to July 21 from 10.4 million the week before. The legal requirement for hospitality and other businesses to display QR “check-in” codes was removed on July 19, but that dramatic decline also suggests fewer people using the app.

An opinion poll by Savanta ComRes this month found that a third of 18 to 34-year-olds in the U.K. have deleted it.

One person who definitely has deleted it is Andy Shorten, 58, who runs a bar in Folkestone, southeast England. He said he did so six weeks ago after his wife was pinged and had to isolate, and he now prefers to rely on rapid lateral flow tests. His staff also take one before every shift, he said.“We run a large hospitality business, it’s our livelihood and we are independent, and if we have to close the business it completely stops our income,” he said in an interview.

The National Health Service app uses Bluetooth technology to anonymously detect whether users have been within two meters of someone who’s subsequently tested positive for Covid-19 for 15 minutes or more. There’s no legal duty to isolate after an app alert, though it’s strongly encouraged by the government.

The government says the app has been downloaded 26 million times, while scientists believe there were 16 million active users at the end of last year.The surge in “pings” caused havoc for British food producers, retailers and pub chains who have warned of supply chains close to breaking point. Ministers responded by allowing limited numbers of key workers to avoid the 10-day isolation to ensure services can keep running, and are planning to exempt anyone who’s fully vaccinated from Aug. 16.

Andrew Opie, director of food and sustainability at the British Retail Consortium, said the situation was improving as case numbers fall. “The new daily contact testing scheme is a welcome response and the government should roll it out as fast as possible for it to further relieve the pressure on the supply chain,” he said.

Covid Comes Back to Hit U.K. Supply Chains as Staff IsolateYet many companies don’t think that goes far enough and want Prime Minister Boris Johnson to bring forward the Aug. 16 plan as soon as possible. On Thursday, carmakers in the U.K. urged the government to exempt vaccinated workers from isolation, warning of severe labor shortages.

The fear is that workers are taking matters into their own hands by deleting the app, and that public trust in the test, trace and isolate program as a whole is eroding at a critical time.

Even though cases have been generally going down, it’s too early to draw conclusions, according to Simon Clarke, associate professor in cellular microbiology at the University of Reading. The start of school summer holidays, recent hot weather and the lifting of most curbs this month -- all of which impact caseloads -- has led to “chaotic” data, he said.

Meanwhile the NHS Covid-19 app is “working as it should,” one of the scientists who designed it, Christophe Fraser, said in an interview. Alerts are high when cases are high, which means people should be self-isolating, he said, adding that while there have been some deletions in recent months, their impact on the number of alerts is limited.

“By far the main driver of the number of pings is the number of confirmed cases,” said Fraser, a professor of pathogen dynamics Oxford University. “My message is don’t delete it.”

But Philip Scott, chair of health and care at BCS, the chartered institute for information technology, said “pandemic fatigue” and falling trust in the government are leading people to delete the app.

“People are fed up and think ‘let’s get on with life’ and the government hasn’t set the best example,” he said. “Ministers talk about caution, but then lift all the restraints.”

Shorten in Folkestone said “pretty much everyone” he knows has already deleted the app.

“They find it intrusive and they’ve been pinged for no apparent reason and they don’t trust that it works -- the whole system of track and trace is a bit of a joke,” he said.