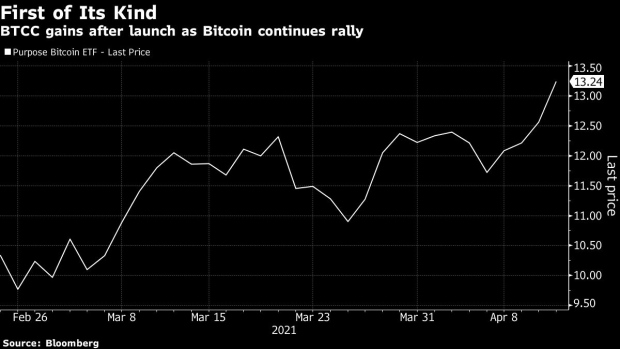 (Bloomberg) -- Less than two months after launching, the first North American Bitcoin ETF already reached $1 billion (C$1.25 billion) in assets, according to a statement from its issuer.

The product from Toronto-based Purpose Investments, ticker BTCC, has seen massive interest as investors clamor for crypto exposure, especially in an exchange-traded fund wrapper. Although Europe has several crypto funds that effectively work like an ETF, this is the first anywhere to carry the ETF label.

In its first trading day in February, more than $165 million worth of shares were exchanged, a huge start for a fund in the much smaller Canadian ETF market.

Its quick cash accumulation underscores the intense demand for Bitcoin products, as U.S. issuers line up to win approval for the first Bitcoin ETF in the U.S. At least eight firms including VanEck Associates Corp. and WisdomTree Investments now have live applications for with the Securities and Exchange Commission, despite regulator reluctance to approve the strategies.

Bitcoin rallied to an all-time high of around $63,246 on Tuesday, ahead of Coinbase Global Inc.’s listing later this week.