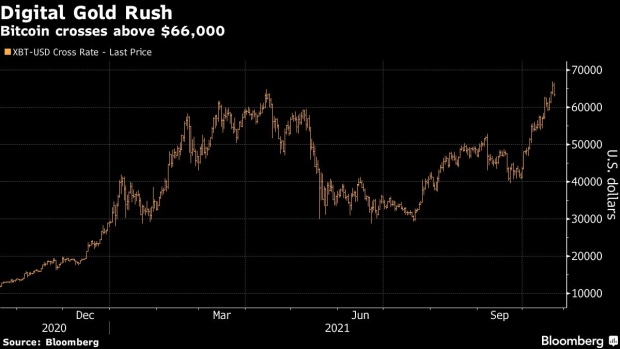 (Bloomberg) -- Just days after launch, the first U.S. Bitcoin futures exchange-traded fund risks becoming too popular for its own good.

The Proshares Bitcoin Strategy ETF (ticker BITO) is already on track to breach a limit on the number of futures contracts it is permitted to hold by the Chicago Mercantile Exchange, according to data compiled by Bloomberg.

After two days trading BITO owns nearly 1,900 contracts for October, and CME rules cap the number of front-month contracts one entity can own to 2,000.

To avoid hitting the limit, the ETF has also amassed 1,400 November contracts. But at the rate it’s adding assets -- the fund already has more than $1 billion under management -- the maximum total position of 5,000 contracts could be in view soon.

An immediate solution is for BITO to spread out its holdings into longer-dated contracts. However, that risks further distancing the fund from the performance of Bitcoin. Its ability to efficiently track the largest cryptocurrency is questionable anyway because it has to pay to roll over contracts, and the futures curve currently slopes upward.

“The end result is the ETF will start taking on potentially significant tracking error versus the spot price of Bitcoin,” said Nate Geraci, president of advisory firm The ETF Store. “The ETF is forced to obtain Bitcoin price exposure at higher and higher prices as it goes further out on the futures curve.”

A spokesperson at ProShares didn’t immediately respond to a request for comment.

The potential good news is that the CME is raising the ceiling to 4,000 front-month contracts, starting with November futures, although there will be a limit of 2,000 contracts for each subsequent month.

While the current pace of inflows could see BITO hitting those curbs too, the launch of competing products may alleviate the pressure. Funds from Valkyrie and VanEck are both due to begin trading in the next few days.

However, the momentum behind the ProShares ETF will be hard to stop at this point, according to Bloomberg Intelligence.

“The unprecedented early volume in BITO makes it like a snowball rolling downhill, as liquidity and assets begets more liquidity and assets,” said Eric Balchunas, senior ETF analyst at BI. “The new ones will have some selling points such as only holding the front month or being cheaper and that will help, but it is nearly impossible to steal volume in the short or medium-term.”

BITO and its peers will also have to contend with the ripple effects on the Bitcoin futures market. JPMorgan Chase & Co. strategists warned Thursday that high demand for the funds risks distorting the derivatives space, steepening the future curve even further and driving up roll costs -- at the expense of ETF investors.

The experience with BITO may pressure the Securities and Exchange Commission to speed up approval of funds that hold Bitcoin directly, Balchunas said.

“That certainly would do the trick in slowing down BITO and providing a release valve for futures demand,” he said.