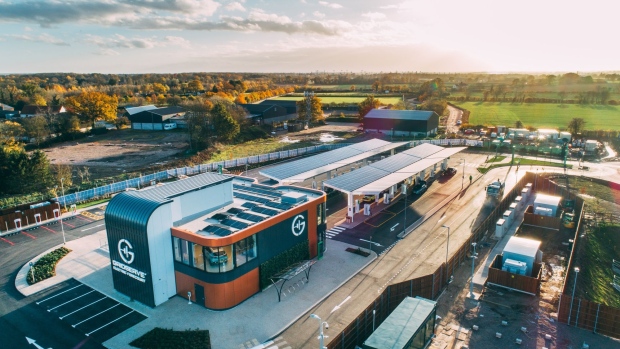 EVs charging at at forecourt , Gridserve

(Bloomberg) -- The first all-electric auto service station will open in Britain on Monday as drivers increasingly avoid cars fueled by gasoline and diesel.

It’s another sign the energy and transport industries are gearing up to deal with as many as 30 million electric vehicles on the road by 2040. Prime Minister Boris Johnson plans to phase out traditional engines in cars from 2030 and set the most agressive target in the Group of 20 nations for slashing greenhouse-gas emissions.

The station in Essex, southeast England, is the first of 100 electric facilities that Gridserve and Hitachi Capital U.K. Plc. are planning and is part of a 1 billion-pound ($1.35 billion) program to roll out the stations across the country. It includes 36 rapid chargers powered only by renewable energy. The charging technology is among the fastest commercially available in Britain and can top up a battery with 200 miles (322 kilometers) of capacity in 20 minutes.

Gridserve has updated “the traditional petrol station model for a net-zero carbon world and is delivering the confidence people need to make the switch to electric transport today -- a full decade ahead of the 2030 ban,” said Toddington Harper, its founder and chief executive officer.

Sales of battery-powered electric vehicles in the U.K. rose 122% last month from a year ago, while hybrids were up 77%, according to industry data published on Friday.

Most of the world’s EV charging infrastructure has been built in China and Europe. North America, with far less robust public subsidy and support, remains a distant third in the charging race, though some hope that a pandemic stimulus plan will catalyze a new wave of construction.

California is the exception with a 40-charger station that opened in February in Pasadena and Tesla Inc.’s largest single-point EV super-charging station with 56 points in Los Angeles.

At Gridserve’s station in Braintree, the electricity is generated from canopies of solar panels above the chargers as well as a network of hybrid solar farms. The U.K.’s first subsidy-free solar farm in Clay Hill is feeding the facility.

There is also a 6 megawatt-hour battery on site, which helps to balance the local grid and store power for use at peak times. For example, on windy winter nights, the battery can hold enough energy for drivers to travel 24,000 miles the following day.

Charging will cost 24 pence per kilowatt-hour of energy, currently the lowest ultra-high power charging rates on the market, according to Gridserve. A typical charge from 20% to 80% costs less than 10 pounds for an average-size electric vehicle.