An agreement between one Quebec-based First Nations territory and Health Canada looks to establish new cannabis regulations that could usher in fresh investment and opportunity for Canada's Indigenous communities.

The Mohawk Council of Kahnawà:ke announced on Monday that it signed a memorandum of understanding with Health Canada that will create a licensing regime alongside the territory's cannabis laws which will allow businesses to pursue cannabis cultivation and processing licences.

While First Nations have been involved in the cannabis industry for some time, their participation ranges broadly from legal operators to grey-market retailers. The federal Cannabis Act provides the legal framework provinces and territories are responsible for determining how cannabis is distributed and sold within their jurisdictions. However, that law does not provide sufficient guidance for how First Nations can sell, grow and process the drug as they are governed under federal purview which supersedes provincial legislation.

While some First Nations-owned cannabis businesses have found success in the Canadian market - Redecan Pharm and AtlantiCann Medical Inc. are two notable examples - much of the industry operates in a flourishing grey market. Ontario's Tyendinaga Mohawk Territory, for example, is home to more than three dozen cannabis dispensaries selling unregulated products with little enforcement taken to rein that market in.

Tonya Perron, Ietsénhaienhs or elected chief of the Kahnawà:ke First Nation, told BNN Bloomberg in an interview that the agreement with Health Canada will soon allow the territory to start luring new producers and retailers to the area through a unique dual-licensing program.

"It was obvious that there needed to be a relationship with Health Canada to provide for the exchange of information between them and our Cannabis Control Board," Perron said. "Because the licencing applications would be happening almost in tandem, it didn't make sense to have any development in isolation without one not knowing what the other [agency] was doing."

A Health Canada spokesperson said that the MOU could serve as a template to establish other licensing protocols for First Nations interested in developing their own cannabis industry.

"Health Canada respects that the Mohawk Council of Kahnawà:ke is putting processes in place and taking a collaborative approach to make sure that cannabis activities in the community are tightly controlled and regulated," the spokesperson said in an email. "This MOU helps to ensure the careful consideration of community processes during Health Canada’s cannabis licensing and oversight activities."

The Kahnawà:ke First Nation first drafted its cannabis regulations in Dec. 2018 and almost partnered with Canopy Growth Corp. to build a large production facility, plus a processing and packaging space in the territory, but plans later fell through. The territory, located south of Montreal along the St. Lawrence Seaway, also doesn't have any cannabis dispensaries, and all cannabis products that would be sold in Kahnawà:ke will come from licensed, not grey market, suppliers.

"My hope is that for those First Nations communities that want to develop something along those lines that we've paved the way for, these laws don't give up their jurisdiction, it doesn't talk about jurisdiction. It really talks about a coexistence and being on equal footing," Perron said.

A trio of British Columbia-based cannabis producers announced a new industry association aimed at ensuring the province's legal pot sector has a collective voice when dealing with or lobbying provincial policymakers.

Tantalus Labs, Rubicon Organics Inc., and Village Farms International Inc.'s Pure Sunfarms subsidiary formally launched the Cannabis Cultivators of B.C. (CCBA) on Thursday. The organization aims to address how B.C.'s cannabis producers should be placed on equal footing with other agricultural sectors as well as getting economic assistance from the province. It will also advocate for increased retail opportunities in the province as well as provide advice on how to tackle the illicit market.

"At the heart of it was making sure that we had a 'B.C. First' mandate across all provinces," said Mandesh Dosanjh, Pure Sunfarms chief executive officer, in a phone interview. "We want to focus on ensuring we're part of the agricultural community and how we can make B.C. bud thrive and how can we continue putting money into the things that make British Columbia and cannabis synonymous with one another."

The newly-launched organization will offer a fresh perspective on cannabis-industry matters and will be separate from the Cannabis Council of Canada, the national industry trade group that advocates for the sector in Ottawa and other provinces. Tantulus Labs CEO Dan Sutton told BNN Bloomberg that CCBA will give provincial members a "fresh start" to get their B.C.-specific voice heard, and hopes that it can foster new regulations that could allow municipalities to allow smaller, legal craft cannabis producers to operate.

"When large firms get together and develop industry associations, they can't equitably share the insights of firms of all sizes who might have different priorities," Sutton said.

The owner of Canadian grocery stores like Sobeys and Safeway is taking its first steps in the medical cannabis space. Empire Co. is partnering with Pathway Health on a new program that aims to educate pharmacists on medical cannabis while also providing a management tool that would facilitate prescriptions through Pathway. The medical cannabis program will be launched throughout Empire-owned pharmacies in Nova Scotia, followed by a rollout across Atlantic Canada and the rest of Canada later this year. Pathway Health President Wayne Cockburn told BNN Bloomberg the partnership with Empire's pharmacy group comes ahead of potential changes to cannabis regulations that would allow the sale of over-the-counter products that only contain cannabidiol (CBD) and not through a regulated or licensed retailer.

With Mexico on the precipice of legalizing and regulating recreational cannabis, former President Vincente Fox thinks marijuana should be part of the recently revised North American trade pact. "Cannabis has to be part of the trading between United States, Canada and Mexico," Fox told BNN Bloomberg. "Canada is an open market for cannabis, so, too is Mexico today. For the moment today for medical use, in September for recreational use." Fox, who sits on the board of Vancouver-based medical marijuana producer Khiron Life Sciences Corp., expects that once the U.S. legalizes cannabis, it should be relatively straightforward to import and export the drug across international borders, which could result in an interesting supply issue for the U.S. and Canada.

Investing in some major U.S. cannabis operators could be a "generational wealth opportunity" for some investors, according to Jefferies Analyst Owen Bennett. In a new report initiating coverage on seven U.S. pot companies, Bennett said that each of those firms should double their share price over the next year due to potential growth in the space. "While we had justified reservations when launching on Canadian cannabis over two years ago, such caution on the U.S. would be misplaced, in our view," Bennett said. That forecast comes amid expectations the U.S. market will see legal pot sales grow at a 14 per cent rate to US$64 billion by 2030, increased M&A opportunities, and legislative changes that could usher in an influx of institutional investment.

Some cannabis companies are employing artificial intelligence and Big Data to help consumers find the right product that fits their needs. Bloomberg News reports that companies like Columbia Care and Endocanna Health are turning to technology to help appeal to cannabis first-timers and connoisseurs alike that aims to create products akin to personalized or precision medicine, optimized based on genetics, lifestyle or even what kind of experience users want to have. While this particular segment of the market is still relatively new, it appears that narrowing the unpredictability gap to create a more personalized cannabis experience may set some of these companies apart.

Alliance Global Partners Analyst Aaron Grey revised his forecast on Canadian recreational cannabis sales this year to $3.8 billion from $4.2 billion as longer-lasting lockdowns have led to slower sales growth than we anticipated. Grey highlighted that Ontario will remain key for the Canadian industry's growth as the province remains on pace to have 1,000 licensed cannabis retailers open by September. That should see Ontario's share of the Canadian market expand to 40 per cent from 35 per cent, in line with the country's population while the additional stores should offset any reduction in lower sales per store as saturation emerges in the provincial retail space, Grey said. While the illicit market is estimated to represent about half of all cannabis sales in Canada, Grey does expect more consolidation to emerge in the industry as there's now over 700 licensed producers in the market. "We continue to see consolidation as key to creating a rationalized competitive environment in the Canadian marketplace," he said.

CANNABIS SPOT PRICE: $5.52 per gram -- This week's price is up 1.0 per cent from the prior week, according to the Cannabis Benchmark’s Canada Cannabis Spot Index. This equates to US$2,014 per pound at current exchange rates.

“We know the rules are where they are, maybe we should take another look at them."
- White House Press Secretary Jen Psaki on whether Olympic policy on cannabis should be changed in light of U.S. runner Sha’Carri Richardson suspended for a positive marijuana test. 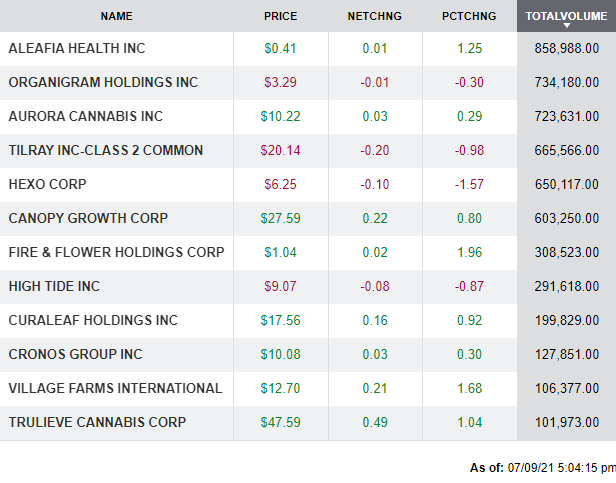