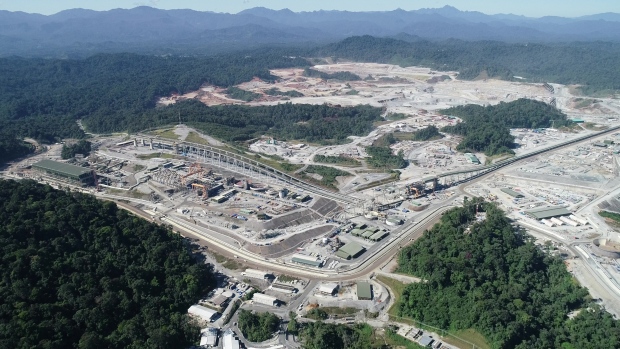 An overall view of First Quantum Minerals' Cobre Panama mine and plant. , Image courtesy of www.first-quantum.com

First Quantum Minerals Ltd. (FM.TO) is poised to fire up a giant copper project in Panama, thousands of miles from its beleaguered mines in Zambia. For bondholders, that’s a welcome distance.

The Canadian copper company is ramping up production at the Cobre Panama plant this year, even as a mining tax hike forces it to shed jobs and cut production at its Zambian facilities. With Panama slated to become a more prominent place of operations, bondholders should benefit as Panama’s stronger credit rating feeds into the debt’s prices, First Quantum President Clive Newall said in an interview.

Where First Quantum does significant business matters to bondholders who closely follow risks associated with lending to companies operating in that particular country. Panama has an investment-grade rating, while Zambia is ranked more deeply into junk.

Any subsequent boost to the bonds from a shift would be a reprieve for First Quantum’s lenders, who’ve seen their notes post significant losses in recent months. The firm, and producers like it, also faced pressures as the copper price tumbled, amid trade tensions and fears of slowing global growth.

“Panama is investment grade and Zambia isn’t, so there should definitely be an improvement in the bonds as the ramp up of Cobre Panama progresses," Newall said in the interview in December.

Country of Risk
First Quantum’s $1 billion of notes due March 2026 have posted about a 15 percent loss on a total return basis since their February 2018 sale, according to data compiled by Bloomberg. That compares with a 2.5 percent return handed to owners of broader Canadian corporate debt, the data show. The First Quantum bonds are now quoted at about 80 cents on the dollar.

“It seems pretty clear to us that these bonds will be considered Panama country of risk in the near future, prompting a repricing,” said Nicholas Leach, a fund manager at CIBC Asset Management in Toronto. “This move could also significantly increase the market for these notes.”

Panama is rated BBB by S&P Global Ratings, two steps above investment grade, while Zambia is rated six notches into junk territory. The Zambian government passed legislation in December that increases royalties for copper, in a move the industry said could lead to more than 21,000 job losses and operators cutting $500 million in capital spending over the next three years.

For First Quantum, the royalty hike was behind its plan outlined in December to cut at least 2,500 jobs in the first quarter at both its Sentinel mine and its Kansanshi facility, which is Africa’s largest copper mine. In March, the firm was also hit with a $7.9 billion tax bill from the Zambian government, an assessment it refutes.

Debt Goals
First Quantum raised its copper production guidance to 595,000 tons for 2018, it said in October. Most of the firm’s copper -- and gold -- production was expected to come from Africa in that year, its financial report shows.

As Cobre Panama gets up and running, that location will become increasingly prominent and Zambia will become “relatively small in comparison,” in terms of cash generation, Newall said. “There’s going to be a switch over the next two or three years as Cobre ramps up to full production and beyond.”

Cobre Panama contributed to a $251 million increase to First Quantum’s net debt to about $6.1 billion in the third quarter. Newall said debt reduction will be prioritized over any significant capital spending, new projects, or “meaningful dividend.”