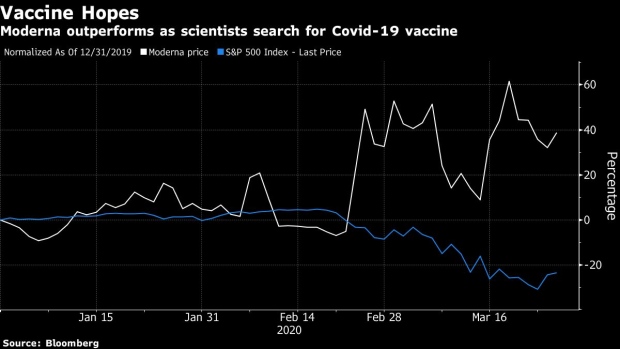 An experimental vaccine for the novel coronavirus developed by Moderna Inc. was dosed in the first patient earlier this month and it seems a first look at the results could come in a little over two months, at least according to Goldman Sachs.

“First data in the near-term (at least 2+ months),” from the initial dosing, analyst Salveen Richter wrote in a research report after a call with executives from the biotech company. Moderna announced dosing the first patient in the early stage study of mRNA-1273 on March 16. The trial in 45 healthy people is being run by the National Institutes of Health’s National Institute of Allergy and Infectious Diseases, with patients in the study getting two doses of the vaccination 28 days apart.

While NIH has control over when results will be disclosed, “management guided to data availability in the near-term and suggested that the first data release will likely include a full cohort (>3-5 patients) to reflect the totality of the scientific picture,” Richter said.

Moderna shares have been outperforming the market since late February as investors look to drugmakers to come up with solutions to the global epidemic, and hope to see stronger immune response and a clean safety profile as mRNA-1273 doses escalate. “An ambiguous response, potentially due to low dose levels or if the vaccine is not as well tolerated as other vaccines, may require additional optimization,” Richter said. The stock rose 3% in pre-market trading on Thursday.

On Monday, the Cambridge, Massachusetts-based company told investors that the vaccine could be available to some patients, likely health-care workers, under emergency use authorization in the fall, depending on the results and regulators. The NIH and the Food and Drug Administration have been signaling that getting a vaccine to the broader public would likely take at least a year. Moderna has already been preparing for the second stage of clinical testing and intends to work with the FDA and other organizations to be ready for more trials.

Moderna is not the only vaccine maker racing to find a preventative treatment for the disease. An executive from Inovio Pharmaceuticals Inc. went on “60 Minutes” over the weekend to tell viewers that it would start a large mid-stage study by the end of the year, although the company had to yet to start testing its vaccine in humans.

There are no guarantees that either of the vaccines will work. The history of developing treatments and vaccines for outbreaks has been fraught with failure and has resulted in few pay offs for drug developers.