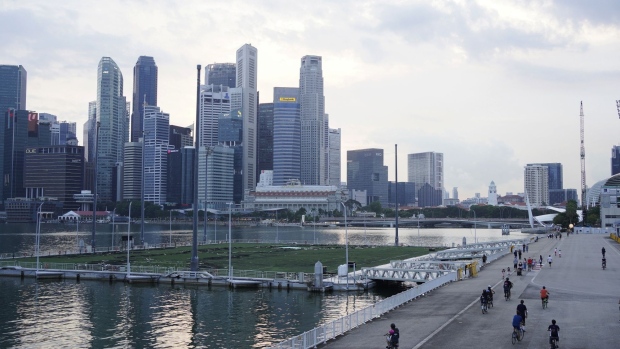 Cyclists ride along the Marina Bay area of Singapore, on Saturday, Sept. 25, 2021. Daily infection levels have been ticking higher since the Singaporean government signaled a shift in its Covid strategy, from wiping out all cases to accepting the virus is endemic. Photographer: Ore Huiying/Bloomberg , Bloomberg

(Bloomberg) -- The first blank-check company to debut in Singapore attracted strong demand for its shares reserved for retail and institutional investors.

The special purpose acquisition company raised S$170 million ($126 million) in an IPO that inaugurated the city-state’s framework for such companies. The final size can be increased if the over-allotment option is exercised. VTAC is set to start trading at 2 p.m. local time.

VTAC is targeting companies within six investment themes, including cybersecurity and artificial intelligence -- though biotech probably won’t be in focus. SPACs in Singapore have 24 months to engage in an acquisition, subject to an extension of up to 12 months.

Two more SPACs are set to debut in the Asian city this month. Tikehau Capital-backed Pegasus Asia is lined up to trade on Friday after a S$150 million IPO. Novo Tellus Alpha Acquisition may list next week after a similar-size deal.