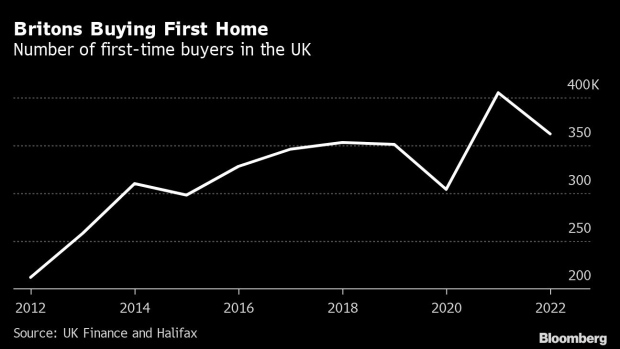 (Bloomberg) -- Almost two thirds of first-time property buyers in Britain are teaming up with a partner or group to get on the nation’s turbulent housing ladder.

Some 63% of first-time mortgage completions were in two or more names last year, compared with 59% in 2021, according to a report by lender Halifax. As recently as 2014, just 43% of first-time owners were joint buyers.

“The cost of purchasing a home is still significant and saving for a deposit can be challenging,” said Kim Kinnaird, mortgages director at Halifax. “The length of time needed, and cost of, raising a deposit are likely having an impact on the profile of the average first-time buyer.”

Britons buying their first home made up 52% of all mortgage deals in 2022, the highest share in the last decade, according to the report. About 362,000 deals involved first-time buyers, a number that’s down 11% on a year ago when a temporary cut to stamp duty spurred sales, but still the second-highest annual figure since 2006.

A separate report published this month by the Yorkshire Building Society showed first-time buyers made up 53% of all property purchases with a mortgage last year.

Britain’s housing market is facing disruption as it adapts to higher borrowing costs and the threat of a drop in house prices. The latter could be a boost for prospective homeowners, with the average property price for first-time buyers currently 7.6 times the average UK salary, according to Halifax.

“More mortgage debt means the stakes are higher as rates edge down,” said Tom Bill, head of UK residential research at broker Knight Frank. “Getting the right mortgage at the right time could mean savings of several thousand pounds.”