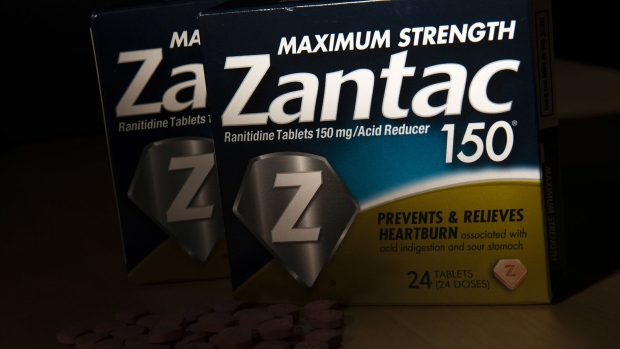 (Bloomberg) -- A lawsuit against makers of Zantac was dropped this week just ahead of trial, people familiar with the matter said, after a series of settlements with some of the drugmakers involved.

Generic drugmakers Teva Pharmaceutical Industries Ltd., Perrigo Co., Sun Pharmaceutical Industries Inc. and Dr. Reddy’s Laboratories Inc. agreed to a combined settlement of more than $500,000 with Joseph Bayer after he alleged the popular heartburn medication caused his esophageal cancer, according to the people. The settlements occurred over the course of months, but the plaintiff’s lawyers on Monday notified the judge overseeing the case that they are dropping the lawsuit after Bayer returned to the hospital for cancer treatment.

A trial was scheduled to start Aug. 22 in state court in Illinois and would have been the first case weighed by US jurors over possible contamination in the widely used drug. Some researchers have linked it to a variety of cancers, including bladder and colon.

Former Zantac users who have sued claim generic drugmakers as well as companies such as Pfizer Inc. and GSK Plc knew the drug’s active ingredient, ranitidine, degraded and turned into the potential carcinogen NDMA under certain conditions. They argued that the drugmakers knew about the deterioration for years and didn’t stop selling the product. Shares of the drug companies sank last week on growing concerns about Zantac litigation.

None of the brand-name makers of the now over-the-counter drug -- including GSK, Pfizer and Boehringer Ingelheim -- paid anything toward the settlement. They were the last defendants left in the case and the claims against them were dismissed.

Drug companies have questioned Zantac’s link to cancer and said the NDMA levels in the medication were close to what was already found in food.

In a statement Tuesday, London-based GSK said the case against it is now effectively dismissed. “The overwhelming weight of the scientific evidence supports the conclusion that there is no increased cancer risk associated with the use of ranitidine,” the company said.

Representatives from Perrigo, Sun Pharmaceutical and Dr. Reddy’s didn’t reply to emails seeking comment. Teva officials Wednesday confirmed they’d resolved Bayer’s claims in the Illinois case for a “nominal value that is far less than what it would have cost the company to go to trial,” according to a company statement.

The Israel-based drugmaker also noted that all generic Zantac makers were dismissed from federal suits over the product, saying that “this reflects the lack of merit of any claims against Teva in these suits.”

Sanofi and other former Zantac makers fell after news broke that the first cancer case slated for trial was dropped, though it was unclear why that hurt the stocks. Sanofi officials said in a statement the company was dismissed from the Bayer case in Illinois and didn’t participate in the settlements, which were funded by generic drugmakers.

Another reason Bayer’s lawyers decided to drop the case against the branded makers of Zantac was his testimony in a pre-trial deposition that he only took generic versions of the drug to treat his heartburn. In court filings, Bayer has said he used both branded and generic Zantac. The branded Zantac makers believe Bayer would’ve failed to prove these products were the cause of his cancer, according to a person familiar with those companies’ thinking.

Zantac hit the US market as a prescription drug in 1983 before transforming into an over-the-counter heartburn treatment in 1995. GSK and Warner Lambert developed it as part of a joint venture and the drug was owned by several companies through the years before Sanofi, which acquired it in 2017, pulled it off the market three years later at the behest of the US Food and Drug Administration.

Bayer claimed Zantac’s many makers knew for years that under hot and humid conditions, ranitidine sometimes deteriorated and turned into an NDMA risk. “After almost four decades and billions of dollars of sales, ranitidine consumption has caused scores of consumers to develop cancer,” Bayer’s lawyers said in an amended complaint.

Two years ago, the US Food and Drug Administration requested the removal of all products containing ranitidine after tests showed they may contain NDMA. The contamination was first flagged by online pharmacy Valisure, which tests all the drugs it dispenses for strength and impurities.

More than 2,000 former Zantac users have sued in state courts, including in California, Illinois, Delaware, Connecticut, Texas and Tennessee. Plaintiffs’ lawyers are projecting there may be more than 50,000 cases filed by October.

There are also more than 1,700 cases consolidated before a federal judge in Florida in what’s called a multi-district litigation. A September hearing will determine whether the science underlying the Zantac claims is legitimate. That will decide whether the cases go to trial.