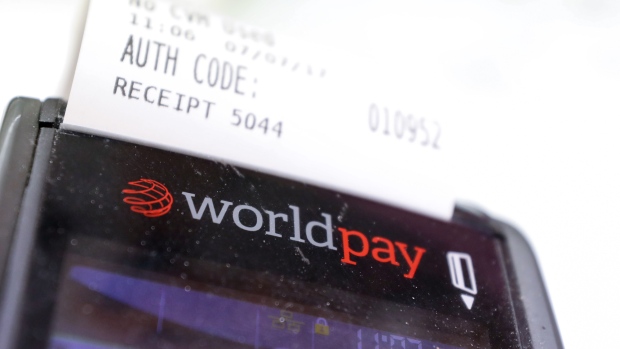 (Bloomberg) -- Fidelity National Information Services Inc. agreed to combine with Worldpay Inc. for about $43 billion including debt, the biggest deal ever in the booming international payments sector.

FIS, based in Jacksonville, Florida, is offering a mix of cash and stock to Worldpay holders. FIS’s current shareholders will own about 53 percent of the combined company, while Ohio-based Worldpay’s investors will hold 47 percent.

The combined company will serve the “high-growth e-commerce industry” and have combined revenue of about $12 billion, the companies said in a statement Monday.

The deal -- when completed -- would make it the biggest in the data processing and payments industry, according to data compiled by Bloomberg News. In January Fiserv Inc. agreed to pay $22 billion to buy First Data Corp. to form the world’s largest payments processor.

Worldpay was itself created by a merger. Vantiv Inc. bought the former Worldpay Group Plc for more than $10 billion in 2017, with the combined company taking the British firm’s name. That Worldpay was once part of Royal Bank of Scotland Group Plc.

Revenue in the payments industry is projected to surge to $2.4 trillion by 2027, according to a report from Boston Consulting Group and Swift.

To contact the editors responsible for this story: Ambereen Choudhury at achoudhury@bloomberg.net, Sree Vidya Bhaktavatsalam